Russiagate, Does it Come on Tuesday, Too?

Of course it does, We'll skip over the usual "Spygate" stuff initially to get to an interesting piece that ties Ukrainegate to Spygate, from Sundance at CTH, Judicial Watch Reveals Surveillance Targets Requested by U.S. Ambassador Yovanovitch and State Department – But Bigger Question is Missing…


. . .   Judicial Watch is hot on the trail of a State Department effort to monitor domestic political opposition.


(Via JW) Judicial Watch has obtained information indicating Yovanovitch may have violated laws and government regulations by ordering subordinates to target certain U.S. persons using State Department resources.
Yovanovitch reportedly ordered monitoring keyed to the following search terms: Biden, Giuliani, Soros and Yovanovitch. Judicial Watch has filed a Freedom of Information Act (FOIA) request with the State Department and will continue gathering facts from government sources.
Prior to being recalled as ambassador to Ukraine in the spring Yovanovitch reportedly created a list of individuals who were to be monitored via social media and other means. Ukraine embassy staff made the request to the Washington D.C. headquarters office of the department’s Bureau of European and Eurasian Affairs.. . .

Obviously Maria Yovanovitch was aware of some pre-existing process that facilitated the surveillance of U.S. persons adverse to the interests of the U.S. State Department; and obviously some process was initiated in order for it to be “ceased or concealed”, right?

Quite an interesting list of people to spy on; mostly journalists who've shown themselves to be unwilling to toe the party line and a few politicians. Liberals are trying to make the firing of Amb. Yovanovitch into an impeachable offense, but IF TRUE (and Judicial Watch has a really good history of being right), and Yovanovitch and her crowd of Deep State anti-Trump State Dept employees were conducting domestic surveillance on US journalists and politicians, that is not only a firing offense, it is a criminal offense. But from Da Hill, Ex-Trump aide to tell Congress she objected to Ukrainian ambassador's removal. I wonder if anyone will ask her about this?


Fiona Hill, a former special assistant to the president, on Monday is set to testify that Sondland and Giuliani went around the National Security Council and official White House protocol to speak directly with Trump about Ukraine, NBC reported last week.

Possibly outgrowth of Amb. Yovanovish's illegal surveillance? Federal Prosecutors Scrutinize Rudy Giuliani’s Ukraine Business Dealings, Finances. "Mr. Giuliani has denied wrongdoing and on Monday said he hadn’t been informed of any investigation. “They can look at my Ukraine business all they want,” he said." These days you have to wonder.


Earlier this week, Sondland was scheduled to voluntarily give testimony to a trio of House Committees but was blocked from doing so at the last minute by the Trump administration.
. . .
Sondland’s attorney says that while his client can provide testimony to the impeachment investigation, the subpoenaed documents are another matter entirely. The ambassador “respects the Committee’s interest in reviewing all relevant materials,” the statement explains, “however, federal law and State Department regulations prohibit him from producing documents concerning his officials responsibilities.”


"Well, first of all, there doesn't need to be a quid pro quo," Schiff told her. "But it is clear already, I think, from the text messages that this meeting that the Ukrainian president sought was being conditioned on their willingness to intervene in the U.S. election to help the president."

For weeks now, we've been told that the transcript was evidence of a quid pro quo, and now Adam Schiff is saying "there doesn't need to be a quid pro quo." Does anyone see this as a huge concession on Schiff's part?

So, I guess Schiff has flip-flopped on whether there was a quid pro quo after all, and in true Democrat fashion is moving the goalposts to justify his party's witch hunt. If everything that's been happening with this impeachment inquiry is because of that phone call, how can anyone justify this impeachment inquiry proceeding when Schiff has conceded that the phone call is exculpatory?


Daily Caller reports Hunter Biden announced Sunday that he will resign from the board of a Chinese private equity firm called BHR Partners, but he’s still one of the two directors of the company that owns his 10% equity stake in the firm, business records show. The other director holds the role of supervisor at the Chinese firm.

More at Da Caller, No, Hunter Biden’s Corruption Hasn’t Been ‘Debunked’. Media like to assert things and then cite each other, but it doesn't really work that way. Matt Margolis PJ Media again, 2020 Democrats Won't Attack Biden Over Ukraine Scandal as ABC prepares To Air Interview With Hunter Biden Tuesday Before Democrat Debate. Expect softballs.


Does anyone think Hunter will be grilled over his past behavior and how exactly he got the job with the Ukrainian energy company in the first place? How about the money from China for his hedge fund business? I’d like to know how he got the membership on the board of the energy company – who set up his contacts in order to receive the offer, and what was expected of Hunter Biden. What exactly did the job entail? And who set up the contact in China for the huge money infusion into his hedge fund? What was expected in return? I don’t think any of this happened because of Hunter’s knowledge, skills, or resume. A person would have to be incredibly naive to think Hunter was able to enrich himself as he did if it wasn’t for his father’s name and 40 years in the swamp.

And the Biden corruption isn't just with foreign companies, Biden Inc: Hunter Biden Was a Paid Consultant to MBNA Starting at Age 21 — As Joe Biden Pushed Legislation to Promote Credit Card Industry. But just a coinkydink, no doubt.

NBC News has a conscience? Weird given the place is a haven for rapists https://t.co/lcwNq21STR
— Comfortably Smug (@ComfortablySmug) October 12, 2019


Bad news for Trump from Biden, via Capt. Ed at Hot Air. Bad News From Biden: No Pardon For Trump In 2021 I think that calls for criminal investigations into the Biden family, starting last week.


Maria Bartiromo had initially reported the IG report on the Carter Page FISA situation was going to be released around the end of this week. Ms. Bartiromo is now reporting a delay:

It’s the “classifications being made” part that raises concern. President Trump granted Attorney General Bill Barr with declassification authority on May 23rd, 2019, so that any classification issues could be minimized and maximum transparency afforded.

Althouse, "[S]ingling out Trump for the turmoil engulfing the country is possible only if you disregard the No. 1 contributor: the refusal of Democrats and most of the media to accept the results of the 2016 election...."


"That refusal has become, among many on the left, borderline psychotic. Nothing else compares to the damage it is doing to our ­nation’s fabric and global image. Trump’s irritating foibles and unorthodox ways pale in comparison. The continuing challenge to his legitimacy is a cancer on the republic."

Writes Michael Goodwin in "Madness of leftist zealots" (NY Post). I strongly agree with that opinion. I am not a Trump supporter, but I have stood firm since the election on this point: Trump won, his supporters prevailed, and they are entitled to what they won. That's why we go to so much trouble over the election.

NYPo, Schiff: I shouldn't have lied so much ‘should’ve been much more clear’ about whistleblower contact


Rep. Adam Schiff Sunday conceded he should have “been much more clear” in explaining the whistleblower’s contact with his House Intelligence Committee.

I'm starting off the impeachment follies with the Wombat's In The Mailbox: 10.14.19 who brings Twitchy: Byron York Makes Adam Schiff Look Even Worse For Booting Republican Matt Gaetz From Impeachment Hearing and Joe For America: Shifty Schiff Now Claims Quid Pro Quo Unnecessary To Impeach Trump, Weasel Zippers: Rand Paul Calls For Probe Into Democratic Senators Who Threatened Ukraine and Mark Steyn: The Undoing Of An Election, also, The Forger & The Scrounger 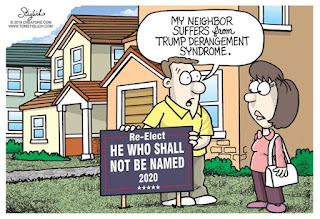 
But regardless of the how and why this happened on this highly suspect time schedule, there are profound practical implications of this dramatic development that should not be overlooked. In my opinion, this move ends any realistic chance of Trump being removed from office by the Senate after he is finally impeached.

After all, if “Cult 45” doesn’t break from Trump, the GOP Senate never will, and the cult won’t leave Trump unless Fox New does first. Without Smith around, that is just not going to happen.

This is not simply because Smith will no longer be the nearly-lone source of facts on a platform made up of mostly pro-Trump propaganda. His audience was not nearly large enough to make a significant difference in the outcome of Trump’s coming impeachment trial.

What is far more impactful about Smith leaving is that it removes an extremely important level of cover for anyone else at Fox News who might have had an inclination to buck the “state-run” format there. For instance, mavericks like Bret Baier, Andrew Napolitano, and Chris Wallace no longer have the ability to point to Smith and say, “Shep said this, so that makes it okay for me to do so.” 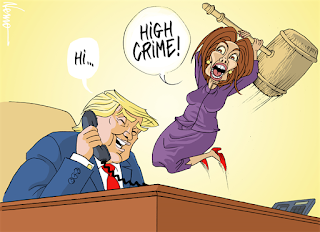 Althouse, Impeachable!, "He's trying to rig the vote on "Dancing with the Stars" . . .", also It's like Trump's "perfect" phone call. ""Why Democrats are sure Adam Schiff is the perfect person to take on Trump" (NBC). Apparently, "perfect" has become a perfectly silly word."

Speaking of Schiffty, Tea Party Patriots File Complaint Against Schiff for ‘Inquiry Into Multiple Violations' of Ethics Rules (CNS new). Rules? I've never been impressed with Congress's ability to enforce ethics. Or even their whole idea of ethics.


The complaint, filed with the Office of Congressional Ethics, states that Schiff violated Ethics Rule XXIII of the Code of Official Conduct. It claims that Schiff “has lied publicly and to the media” about his alleged interactions with the “whistleblower” who complained about Trump’s Ukraine phone call.

The complaint also says that Schiff fabricated testimony before the committee, and that he previously “used and abused his position” on the Intelligence Committee “to seek damaging and negative information about President Trump from Ukrainian sources.” 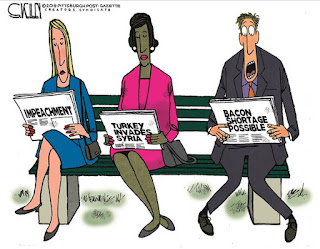 Note that this appears to be a global phenomenon. The British political class is upending all the norms to fight Brexit, and in Canada, well: “The pump is being primed to get Canadians to accept Trudeau hanging on as prime minister if Scheer wins a minority government, a radical idea with no precedent in modern federal politics.”