The Remainder of Todays Russiagate

Some random Russiagate. Where in the world is Carmen Sandiego Joseph Mifsud?


Why did Mifsud disappear? Where did he go? And who does he think may want to kill him? At this point, we can only speculate.


You could call it The Maltese Falcon, but the title's been taken. And The Joseph Mifsud Story doesn't quite have a ring to it. Besides, there are so many more international players -- Italians, Australians, Brits -- that we need a wider cast as well as a better title. Peter Lorre, where are you? And Sydney Greenstreet?

It's the great movie that will never be made. It would blow Hollywood's narrative to smithereens. Robert De Niro's head would explode. He'd release a fusillade of f-bombs the likes of which you have never heard, and probably take it out on the nearest female.

But if you're looking for an explanation for why the world has gone crazy (at least the American part of it), if you want to know how such an outrageous liar as Adam Schiff (aka the Jussie Smollett of Congress) has been able to take center stage, if you want to know why half the country doesn't talk to the other half, you should look no further than the story of the missing Maltese professor Joseph Mifsud.

But did Bill Barr get to speak to him?


Socialists once perceived the CIA as a right-wing, swashbuckling gang that deposed communist dictators such as Salvador Allende and attempted the assassination of Fidel Castro. In the last couple of decades, though, the left has figured out that the CIA is on its side. The CIA is just tens of thousands of donut-eating Big Government employees in Northern Virginia whose votes have turned Virginia blue.

There is political diversity at the CIA, but it is segregated by job. My colleagues who conduct espionage in foreign countries are overwhelmingly Trump-supporters. They operate in rough places and see up close the benefits of our democracy. Some of them come from families that suffered under communism in the Soviet Union, China, Vietnam, or Cuba and have a visceral hatred of socialism.

CIA people in D.C. are overwhelmingly anti-Trump and fans of Big Government. There are many exceptions, of course. But the CIA, deep down in its Jabba the Hutt mind, understands that when it expands in the U.S., it is favoring its blue agenda.

There are probably more people at the CIA processing health insurance claims than there are dedicated officers under deep cover overseas.


Democrats are trying to widen the Ukraine controversy, which centers on Trump’s mention of the Bidens on his call with his Ukrainian counterpart. They want to drag in his urging Ukraine, Australia and others to cooperate with William Barr’s investigation of the origins of the Russia probe.

There’s nothing wrong or ­unusual about a US president asking foreign leaders to provide information useful to his attorney general in an investigation. Why would there be? Except the president’s detractors don’t consider Barr’s investigation above-board. In fact, they consider it another form of Trump’s perfidy.

In its report on Trump’s call with the Australian prime minister, The New York Times says — in a news report, mind you — that the call “shows the president using high-level diplomacy to advance his personal political interests.” Trump is pleased with Barr’s ­investigation and would be even more pleased if it unearthed anything untoward. That doesn’t make it merely a pet political project or mean that there isn’t a genuine public interest in knowing in greater detail how and why the Russia story got started.

The Times of London reported of Trump’s call to British Prime Minister Boris Johnson that he wanted “to gather evidence to ­undermine the investigation into his campaign’s links to Russia.” There’s not really anything to undermine, though, since the investigation has been over for months.

With that, let's start on the Biden/Ukraine section. From sundance at CTH, Rudy Giuliani explains how “The Democrats are Covering Up Corruption, Massive Corruption”…. Lengthy but useful.

It's a good rule of thumb that Democrats are deeply into whatever it is they're accusing you of this time. Don Surber, Biden duped senators into helping his corrupt son. Did they really have to be duped?

The letter offered Ukraine an incentive ("Ukraine’s economic productivity is a formidable challenge -- one which we remain committed to helping you overcome") for a so-called reform of the prosecutor's office.

A month later, it was done.

But far from exonerating Quid Pro Quo Joe, it shows the extent of his efforts to squash the investigation of his corrupt son. As vice president, Biden was president of the Senate at the time.

In the impeachment trial, the testimony from the three Republicans should be interesting especially when Rudy Giuliani asks them if they knew Hunter Biden raked in a small fortune from the crooked company the prosecutor was investigating.


Mark (not my brother, I think)

@realDonaldTrump is on the legal ground to work with Ukraine and China on investigations into criminal matters: 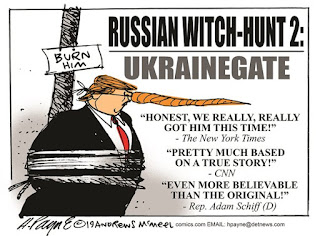 “Nancy Pelosi today, on @GMA, actually said that Adam Schiffty Schiff didn’t fabricate my words in a major speech before Congress. She either had no idea what she was saying, in other words lost it, or she lied. Even Clinton lover @GStephanopoulos strongly called her out. Sue her?” the president wrote on Twitter.

Allahpundit, Hot Air at Ron Johnson: Sondland Told Me Trump Wanted A Quid Pro Quo From Ukraine — But Trump Told Me He Didn’t

BOOM: Nancy Pelosi's son Paul Pelosi Jr. (who went to Ukraine in 2017) was a board member of Viscoil and executive at its related company NRGLab, which DID ENERGY Business in UKRAINE!

And Nancy Pelosi appeared in a promotional video for the company!https://t.co/wlndLhPqLe
— Patrick Howley (@HowleyReporter) October 3, 2019

The Obama administration originally lied about Brennan's visit, but they were forced later to admit the report was true after evidence of Brennan's visit emerged. This is at guy, John Brennan, who over the weekend encouraged every deep stater to come forward and blow the whistle on Trump. (summarized) "There is no limit on the number of individuals who can use the whistleblower statute. If you think you were involved in unlawful activity as a result of Trump, now is the time to report it!"

And to start off a link style impeachment follies section, Stacy McCain brings you ‘Nothing Short of a Coup’


The Trump campaign has been piling up millions and the Democrats have given them an excuse to start spending it early with ads like this.

“Punch back twice as hard,” as somebody said. 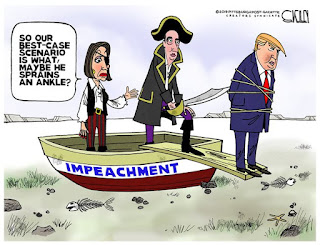