The Ghost Forests of Doom!

About once a week, some paper in the Chesapeake Bay region puts out another "the water's rising and we're all gonna die" type article on climate change and sea level rise. I don't take them all on, it just gets tiring, but David Middleton at WUWT takes on one of them, and does a rousing good job: The Ghost Forest of the Delmarva Peninsula… Because Climate Change

Ghost Forests Are Visceral Examples of the Advance of Climate Change

As Matt Kirwan walks through Maryland’s Blackwater National Refuge, his rubber boots begin to squish. With each step the land beneath him turns from dry ground to increasingly soggy mud. The trees around him go from tall and full of leaves or needles to short, bare and pale white.

Partway out, ankle deep in water, Kirwan stops. “At this point we’ve transitioned from being in the forest, to actually being in a full-fledged marsh,” explains the Virginia Institute of Marine Science ecologist. “This ground is now too salty and too wet to support living trees.”

Kirwan is standing in the midst of what is known as a “ghost forest.” These swaths of dead, white, trees are created when salty water moves into forested areas, first slowing, and eventually halting, the growth of new trees. That means that when old trees die, there aren’t replacements.
[…]
Kirwan likens ghost forests to other drastic markers of environmental change. Similar to how a receding glacier leaves signs of where ice used to be, ghost forests represent where dry land used to be. “You can touch it and see it,” he says. “It’s just as real as a melting glacier.”
[…]
“Ghost forests are the most striking indicator of climate change anywhere on the Atlantic coast,” says Kirwan.
One of the primary mechanisms for ghost-forest creation is sea-level rise, says Keryn Gedan, a professor at George Washington University in D.C., and Kirwan’s co-author on a recent article about the phenomena in the journal Nature Climate Change.
[…]
Climate change also exacerbates events such as hurricanes, which bring storm surges that drive salt-water landward, explains Emily Bernhardt, a professor at Duke University. Droughts, which have been similarly linked to climate change, mean less rain to wash out the salt that enters the ecosystem, “compounding the effects of sea level rise,” she says.
[…]Time


The word “subsidence” was notably not used at any point in this article.
Tik Root has a a BA in International Politics and Economics from Middlebury College (a Bill McKibben brainwashing victim?). He has an excuse… He’s not a scientist. What about the professors who contributed to this article? The paper by Kirwan & Gedan at least mentions subsidence. Although they never mention the fact that Blackwater National Wildlife Refuge, located on the eastern shore of Chesapeake Bay, is an area notorious for land subsidence..

More than half of the sea level rise in the vicinity of Blackwater National Wildlife Refuge is due to subsidence.

At this point the authors went off on a tangent about accelerating sea level rise in the area, citing the IPCC and other nonsense. However, up until that point, this was some solid geology.

This series of sea level rise curves tells the story quite well.

Figure 2. Blackwater NWR is in the red rectangle on the Delmarva Peninsula. 2.5-2.7 mm/yr of the ~3.4 mm/yr SLR (red curve) is due to land subsidence (green curve), assuming the GIA model is realistic.

Actual measurements of land elevation changes southwest of Blackwater NWR are consistent with the GIA model. 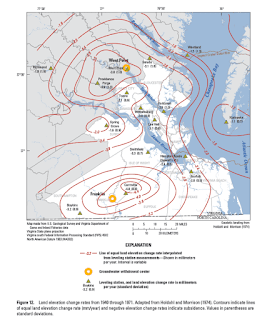 The Ghost Forests of the Delmarva Peninsula “are visceral examples of climate change”… at the end of the Pleistocene Epoch. At least half of the apparent sea level rise in the area is due to subsidence of the land. While some of the subsidence is due to groundwater withdrawal and some possibly related to the underlying 35 Ma Chesapeake impact crater, the vast majority of it appears to be due to the “continued collapse of the MIS 2 forebulge”, which is due to the retreat of the Laurentide Ice Sheet at the end of the final glacial stage of the Pleistocene Epoch.

In other words, it's natural. Anyway, we're having super high tides today (as we did yesterday) due to a storm off the coast.

The current tide at Solomons Island:

The water is nearly over the docks at the harbor.
Posted by Fritz at 3:22 PM