Sweeping up the debris from last week, in preparation for a new week of fresher material. Leading off with the Flynn Affair, Matt Vespa at Town Hall plows through Sydney Powell's court filing to find how Top FBI Officials Conspired To Entrap Ex-Trump National Security Adviser.


. . . There are many more details about the discrepancies between what’s in the official FBI report and what the agents wrote in their notes. These allegations are nasty business. It’s one why we should always distrust and be fearful of government agents. No, fearful is not the right word. It’s the FBI and the rest of the political class who should be afraid of us, the people. That notion that there are far more of us than there are of you—who will smash your homes and livelihoods if you abuse power, should be ingrained into the psyches of the political class. It’s the government that should be deathly afraid of the people. And after this Russia collusion nonsense and the impeachment circus that’s engulfing House Democrats on the Hill, rule by fear might not be such a terrible protocol when it comes to keeping this D.C. scum in line.

...Thank you @foxandfriends! Hopefully this is just the beginning of a massive story of injustice and treason. You will never learn this from the corrupt LameStream Media who get Pulitzer Prizes for reporting the story totally wrong. The ones who report it right get only RESPECT!
— Donald J. Trump (@realDonaldTrump) October 26, 2019 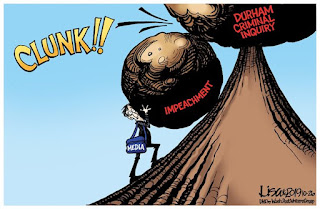 The problem is not that the perjury statute is never enforced. Rather it is enforced against people without allies in government. Thus, Roger Clemens was prosecuted for untrue statements before Congress. He was not given the option of giving the “least untruthful” answer.

Another reason for the lack of prosecutions is that the perjury process is effectively rigged to protect officials accused of perjury or contempt before Congress. When an official like Clapper or Nielsen is accused of lying to Congress, Congress first has to refer a case to federal prosecutors and then the administration makes the decision whether to prosecute its own officials for contempt or perjury. The result has almost uniformly been “declinations” to even submit such cases to a grand jury. Thus, when both Republicans and Democrats accused CIA officials of lying to Congress about the torture program implemented under former president George W. Bush, not a single indictment was issued. 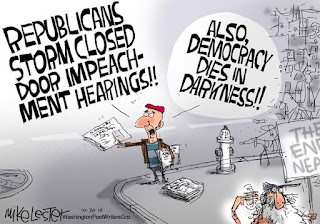 Roger Kimball at AmGreat on  Multitasking the Intelligence Community Roundup


Clapper’s response was revealing, not to say hilarious. Remember, the question is: Are you “concerned” (i.e., worried, anxious) about the investigation overseen by Attorney General Barr and U.S. Attorney John Durham.

Clapper’s multipart answer: I don’t think there was any wrongdoing; I was just trying to help the country; if there was wrongdoing, it was not my fault; I was just following orders.

Ipse dixit: “I don’t think there was any wrongdoing.” “All of us were trying to navigate a very, very difficult, politically fraught highly charged situation.” “For my part, my main concern was the Russians, and the threat posed by the Russians to our very political fabric.”

The “message” he is getting from the controversy is that we should “ignore the Russian interference and meddling and the threat that it poses.” (Read: “Don’t blame me,” he seems to say, “if the Russkie’s take over.”)

Big takeaway: it is “disconcerting” now to be “investigated for doing our duty, what we were told to do by the president.”

And exactly what were they doing? Investigating a candidate, President-elect Trump, with the end, said Clapper, of preparing a big, comprehensive report for Congress and “the next administration.”

You see that James Clapper, despite appearances to the contrary, does have a wry sense of humor. He can say with a straight face that the covert investigation aimed at destroying Donald Trump was actually an investigation intended at least in part for the incoming Trump administration.

Chuck Ross at Da Caller,  Maria Butina Says She Entered Plea Deal In Part Because Of ‘Anti-Russian Hysteria’ In US. I think she did violate FARA, (a law I think should be repealed, or overturned on 1st Amendment grounds), but her prosecution was carried out to tie the NRA and prominent conservatives to Russia, possibly to obtain FISA warrants.

From Buzzfeed, There’s A Village In Ukraine Where Rudy Giuliani Is The Honorary Mayor. That’s Not The Weird Part Of This Story. Yes, it seems to be. The rest is just politics being dressed up as a scandal. 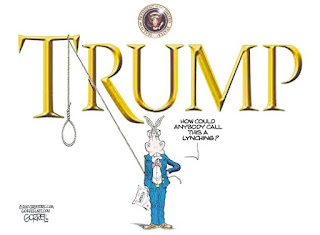 GOP Can Fight Anti-Trump Coup Or Surrender Government To Democrats

GOP lawmaker: I haven't heard 'a single thing' you could impeach Trump for | TheHill

WSJ op-ed idea: A failed impeachment attempt should mean the president is eligible for a third termGOP lawmaker: I haven't heard "a single thing" you could impeach Trump for - Hot Air

Rep. Dan Crenshaw Tries To Get Access To Impeachment Inquiry Records And Pelosi/Schiff Shut Him Down ⋆ Joe For America

CNN's Jake Tapper Gets Fact-Checked On Air By John Kennedy 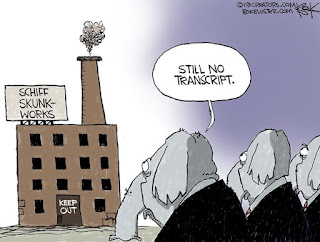 Jeff Carlson on Twitter: "When you lie and leak repeatedly, there are consequences. NBC is nothing if not predictable.… "