Ring Around the Russiagate 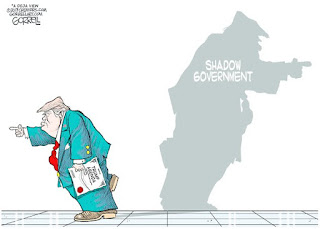 Trump chased the weasels. A pretty good haul of the "original Russiagate" today. Information is starting to leak out about the upcoming IG report, and the Durham investigations. Sundance at CTH, Maria Bartiromo: IG Report on FISA “Will Be Released October 18th – As Thick as Telephone Book”…

Against new information that U.S. Attorney John Durham has lengthened the time-frame for this investigative inquiry into the DOJ and FBI activity around the 2016 election, earlier today Fox Business host Maria Bartiromo revealed (and President Trump tweeted) the FISA report by Michael Horowitz will be released on Friday October 18th.

If that time-frame for the IG report is accurate, that means the classification review has been completed; any remaining classified information not specifically authorized in the inspector general report, a decision granted to AG Bill Barr, would be placed in a classified appendix that is not available to the public.


However, based on what he has been finding, Durham has expanded his investigation adding agents and resources, the senior administration officials said. The timeline has grown from the beginning of the probe through the election and now has included a post-election timeline through the spring of 2017, up to when Robert Mueller was named special counsel. 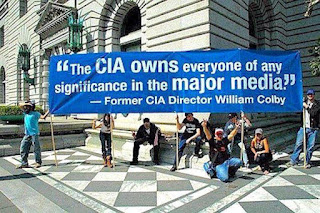 
If Durham’s scope now includes the whole Mueller probe right up through 2019, however, that would be yuuuge — and would create an immediate backlash. Special counsels are no longer entirely independent, so the DoJ has authority to investigate them, but it certainly would put a damper on the next special counsel that gets appointed.


Rosenstein is a central character to all events, and at the end of the Mueller investigation -through today- the DOJ continued to black out any information that evidenced Rosenstein’s duplicitous activity.

As a result, CTH has viewed the transparent DOJ redactions as a purposeful effort to protect Rosenstein. However, recent activity and media reports outline the possibility of another motive. Perhaps, just perhaps, the evidence of Rosenstein’s activities has been withheld because Rosenstein is a subject of the Durham investigation. First watch this: At CR, Mark Levin: Chuck Todd is ‘unhinged’ and a ‘disgrace’ and at RCP, Chuck Todd and the Demise of True Journalism


Federal Judge Beryl Howell, an Obama appointee on Tuesday signaled her support for House Democrats who are fiercely fighting to get their hands on the grand jury material currently redacted in Mueller’s report.

House Democrats filed a lawsuit in late July arguing they need the secret grand jury material from Robert Mueller as part of their ‘impeachment investigation’ into President Trump.

On the whistleblower, WaPoo reports that Trump ally on Fox News calls whistleblowers ‘suicide bombers,’ accuses Democrats of ‘regicide’. Aw, did he hurt your widdle feewings? Charlie Martin, PJ Media asks Who Does the Whistleblower Know?


It seems to me — and this is just a plausible inference, I'm not asserting it's the truth — it seems to me that the only people who would be "visibly shaken" by that would be someone who already has guilty knowledge of Crowdstrike, Burisma, or both.

Maggie's Farm, Retired CIA chief: This Trump business smells like an Op to me


It appears we have a “whistlemole” in the White House. Are they a leaker? A liberal? A deep-stater? A spy? As the master novelist John le Carré says, “The more identities a man has, the more they express the person they conceal.”

Adam Schiff is making a mockery of Congress. And he needs to be stopped.

He fabricated a call transcript, lied about dealings with the whistleblower, and spread false allegations of Russian collusion.


CBS claims to have Read the whistleblower's memo about Trump's Ukraine call, as described to CBS News. So what is that now, fourth or fifth hand?

Putting the "quo" before the "quid" sundance, Solomon Reports: Ukraine Investigation into Burisma/Biden Was Re-Opened in February 2019…, before the phone call. Ace, Womp Womp: Document Shows That Ukraine Had Already Re-opened Probe Into Hunter Biden's Firm Months Before the Trump Phone Call, Plus: Ukrainian Prosecutor On Tape Saying He "Helped" Hillary Clinton's Campaign "I sense a Logan Act violation here in John Solomon's illegal reporting of facts that Jake Tapper doesn't like."

For Trump It’s About Corruption, Not Politics by Brian C. Joondeph, AmThink. Hot Air cites the NYT, What Hunter Biden Did Was Legal — And That’s The Problem. I tend to agree, although I don't really know that law that well, but I don't see how the law can forbid Hunter from pursuing business, even if it shows exceptionally bad taste; but if any of that money gets back to Dad . . . oh. Zero Hedge, Joe Biden 'Personally Paid $900,000 By Burisma' According To Ukrainian MP In Bombshell Admission

Stacy McCain, Ukraine Official Says Joe Biden Got Paid $900,000 to Lobby for Burisma. I sure hope he filed his FARA papers, or he could end up sharing a cell with Paul Manafort.


Question: Do I know this to be true? No, but what Derkach is saying matches what is known about Hunter Biden’s role in Rosemont Seneca:


Hunter Biden co-founded Rosemont Seneca Partners in 2009 with Christopher Heinz, stepson of John Kerry, the former secretary of state, and scion of the Heinz processed food fortune, and Devon Archer, a financier and former Abercrombie & Fitch model who attended Yale with Mr Heinz.
In 2014, Rosemont Seneca was involved in an attempted $1.5bn fundraise for a new fund launched by Harvest Fund Management and Bohai Industrial Group, the Chinese asset manager, according to a Wall Street Journal report at the time. The Bank of China International Holdings was one of the biggest stakeholders in Bohai at the time.
Mr Archer first connected with Mykola Zlochevsky, co-founder of the Ukrainian gas company Burisma, in 2014 when he travelled there to pitch a Rosemont-linked real estate fund that he managed. Mr Archer joined Burisma’s board in 2014. Hunter joined soon after.

If what Derkach is saying is true, then Rosemont Seneca served as a pass-through by which this Ukrainian bribery was laundered, creating “plausible deniability” for Joe Biden, who can claim that the money he got from his son’s partnership had nothing to do with the Ukraine deal. But we shall wait to see if this story is further confirmed.

Matt Margolis, PJ Media, Joe Biden's Family Has Been Getting Rich off His Political Career for Decades. As Adam Mill at AmGreat notes, The Ukraine Hoax is About Protecting the Side Hustle. Americans don't pay their politicians what they politicians think they are worth. Hence the side hustle.


Corruption in modern D.C. is shaped like a triangle. A person or entity seeking a favor doesn’t hand the money directly to the politician or public official. Instead, the money goes to a trusted family relation under a vague “consulting” or “speaking” arrangement. This golden triangle of corruption appears over and over again in the Russia collusion hoax.

The Clinton email scandal and the Biden/Ukraine scandal have a lot in common. Both originated with snooping into high-level triangle schemes but morphed into a counter-scandal against Trump. In Clinton’s case, she deleted 30,000 emails that likely contained more evidence of favors to donors and friends. The process was so formalized that one Clinton Foundation official actually wrote a memo bragging about how the foundation work led to lavish speaking fees for Bill Clinton. As an example, he obtained speaking fees for Clinton from UBS in the amount of $900,000, $750,000 from Ericson “plus $400,000 for a private plane.” The memo author bragged that he negotiated a $1,000,000 fee for a one-hour Bill Clinton speech in China. When Clinton lost to Donald Trump in 2016, she no longer had influence to sell and the donations to the “charitable” foundation dried up.

And too much impeachment crap to wade through twice: 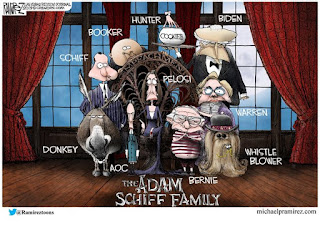