Fresh off the blotter, Insty cites Kimberly Strassel at the paywalled WSJ in Whistleblowers And The Real Deep State.


The “deep state”—if we are to use the term—is better defined as consisting of career civil servants, who have growing power in the administrative state but work in the shadows. As government grows, so do the challenges of supervising a bureaucracy swelling in both size and power. Emboldened by employment rules that make it all but impossible to fire career employees, this internal civil “resistance” has proved willing to take ever more outrageous actions against the president and his policies, using the tools of both traditional and social media.

Government-employed resisters received a call to action within weeks of the new administration. Deputy Attorney General Sally Yates became acting attorney general on Mr. Trump’s inauguration and Loretta Lynch’s resignation. A week later, the president signed an executive order restricting travel from seven Middle Eastern and African countries. Ms. Yates instructed Justice Department lawyers not to defend the order in court on the grounds that she was not convinced it was “consistent” with the department’s “responsibilities” or even “lawful.” She decreed: “For as long as I am Acting Attorney General, the Department of Justice will not present arguments in defense of the Executive Order.”

Mr. Trump fired her that day, but he shouldn’t have had to. Her obligation was to defend the executive order, or to resign if she felt she couldn’t. Nobody elected Sally Yates. . . .

Insty makes the case for the spoils system, but in fact, we now have a "half spoils" system, where Democrats pack the bureaucracy with fellow travelers, but Republicans are all but excluded.

From sundance at CTH, Stephen Miller Discusses the “Fourth Unelected Branch of Government” and the Impeachment Agenda…

Also from Sundance FISA Judges Collyer and Boasberg Both Identified NSA Databases Used for Political Surveillance…, but Gordon Wysong at AmGreat wonders Will We Ever Prosecute? It's doubtful. The Deep State protects its own.

On Da Hill, Comey says he has a 'fantasy' about deleting his Twitter account after end of Trump term, after he gets through helping to defeat Donald Trump. Was there every any doubt he politicized the FBI?

The American Mirror, FLASHBACK: Tom Brokaw called out Biden corruption — in 2008!, but that was then. The Last Tradition, 'Hunter you are a loser, why did you get $1.5 billion dollars?'  At the Guardian, Hunter Biden is a reminder: Democrats are morally corrupt, too "I don’t want to hear Democrats pretending that the fact that Biden’s son got a do-nothing $600k per year corporate handout is unremarkable. It is wrong." 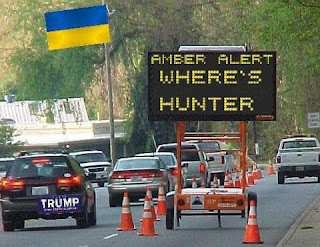 Jonathon Turley on Da Hill, He who must not be named: How Hunter Biden became a conversation-stopper

Hunter Biden: The mere mention of his name seemingly triggers the vapors among cable TV hosts and their guests.

When President Trump turned to the Bidens and Ukraine in a speech, MSNBC host Nicolle Wallace cut off the coverage, declaring she had to protect the listeners: “We hate to do this, really, but the president isn't telling the truth.” When Sen. John Kennedy (R-La.) tried to answer a question about the Ukraine scandal by referencing the Bidens, “Meet the Press” host Chuck Todd angrily told him not to “gaslight” the nation.

The Bidens, simply, are not what well-bred people discuss in polite company, apparently. Indeed, many journalists seem to be channeling not Edward R. Murrow, the fabled CBS newscaster, but Florence Hartley, the author of “The Ladies' Book of Etiquette, and Manual of Politeness” in 1872. Hartley warned her readers to “avoid, at all times, mentioning subjects or incidents that can in any way disgust your hearers.” . . .

Chris White at Da Caller, Biden’s Campaign Is Asking Major Media Outlets, Big Tech To Black Out Trump’s Ads On Ukraine, of course, but the sad part is that the media is taking those orders. Karen Townsend at Hot Air, Biden To Hollywood Donors: Guiliani Is A “Thug”, “I Know Him.”  Sundance, The Last Desperate Effort to Protect “The Chosen One” Will Likely Fail (Perhaps by Design)…

Breaking from Bloomberg, Hunter Biden Steps Down from Chinese Board Amid Trump Attacks. What took so long?

Althouse notices the NYT waffling, New word: issaidtobe. "Giuliani Is Said to Be Under Investigation for Ukraine Work/Prosecutors are investigating whether the president’s lawyer broke laws meant to prevent covert foreign influence on the government" (NYT). The Last Tradition, Corrupt Fed prosecutors at SDNY make politically motivated Arrest of Two Giuliani Associates Who Helped Him on Ukraine. That's my first thought too, but notice that John Solomon, above, who I respect is giving them the benefit of the doubt.

Devin Nunes Asks Whistleblower: ‘When Did You Begin To Coordinate With The Democrats?’ 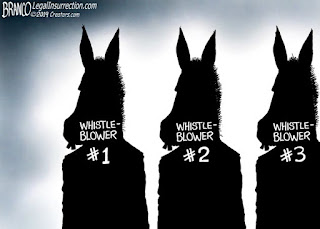 From the Babylon Bee, Survey Finds More People Would Support Impeachment If They Knew What Crime Trump Was Supposed To Have Committed. Heh! Not satire, from Tammy Bruce at Live Wire, Adam Schiff Refuses To Meet Ten Senior Citizens Because… Security!.

Doug Ross, Democrats` Treatment of Trump During “Impeachment” Is How They`d Like to Treat Each of Us in Court 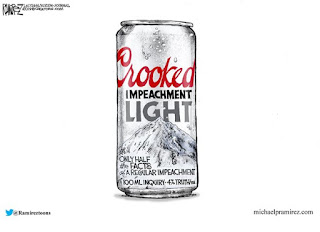 I want you to think about how the Pelosi-Schiff impeachment process is being conducted. Imagine a criminal trial or civil action during which the “Democrat Prosecution” -- the prosecutors -- conduct themselves as follows:

• Prosecutors issue repeated, baldfaced lies to the public (“I’ve never spoken to the whistleblower…” -- Adam Schiff, Liar-In-Chief or LIC)
• Prosecutors secretly solicit accusers
• Prosecutors collaborate with accusers to assist with the creation of a “complaint”
• All testimony occurs in secret
• No transcripts are made public
• No defense counsel are permitted
• The defense is prevented from calling witnesses or issuing subpoenas
• The accused is assumed guilty and must prove him- or herself innocent
• The accused is afforded no due process
• Prosecutors leak to -- and collude with -- the media to drive public opinion and influence the jury
• All procedures are secret: a Star Chamber of high-level Democrat partisans, donors and -- perhaps -- foreign interests like China conduct clandestine meetings