For the top of the "Spygate" section, we have more on the Flynn matter. Elizabeth Vaughn at Red State postulates that Flynn lawyer Sydney Powell has a mole in the DOJ; Balls To The Wall! Has The Intrepid Sidney Powell Tapped Into A Deep State Source?

Powell was a federal prosecutor for ten years and she is bound to have connections inside of the Department of Justice. She has uncovered some pretty damning information to make the case that Flynn was ambushed by then FBI Deputy Director Andrew McCabe at the request of then FBI Director James Comey. She must have a high level source either inside the DOJ if she’s been able to obtain this kind of information. Questioned about this by Chaffetz, she of course, would not reveal her source.

and from sundance at CTH, Andy McCarthy does a pretty good job of explaining the pros and cons of Sydney Powell's strategy:

“Andrew McCabe was offered a pre-indictment plea agreement and turned it down. So US attorney Durham has impaneled a grand jury...John Brennan and James Clapper should be put under oath and questioned too.” — @marklevinshow
— Rich Valdes 🇺🇸 (@RichValdes) October 25, 2019

Lock him up! Margot Cleveland at Da Fed, All The Russia Collusion Clues Are Beginning To Point Back To John Brennan. Lock him up, too.

LOL. Barack Obama is going to love this interview his former DIA James Clapper just gave to CNN about the Durham probe: “It’s frankly disconcerting to be investigated for having done... what we were told to do by the president of the United States.” https://t.co/peAoCvjWCg
— Matt Taibbi (@mtaibbi) October 25, 2019

Him, too! Paul Bedard, WaEx, Trump accuses Obama of treason for ‘spying’ on his 2016 campaign. Treason might be a little strong, but it's certainly impeachable conduct by current standards. And, again from sundance, Irrelevant Carter Page Sues DOJ to Preview IG Report on FISA – A Deeper Dive Into The “Bigger” Picture…. Carter Page was just an excuse to open FISA warrants that would allow Comey/McCabes FBI crew to surveil the Trump campaign. Comey on Trump Winning in 2020: I’ll Be at ‘My New Home in New Zealand’ (Grabien). Hmm, I'll bet we have an extradition treaty with New Zealand. Maybe Venezuela would be better choice. Lock him up!

CNN, Events behind Trump's decision to release Ukraine money remain a mystery, so we'll put the worst possible spin on it. And, Pompeo endorses work of Ukraine diplomat dismissed by Trump as 'never Trumper'. Just because someone is a never-Trumper doesn't mean they can't do some good work. WSJ, Sondland Told House Panels Trump’s Ukraine Pressure Was Quid Pro Quo "U.S. envoy to EU told House committees that he believed White House meeting was conditioned on Ukraine opening investigations, his lawyer says." Do you see the difference between the headline and the subline? "He believed" means he didn't know for sure. More heresay. Andy McCarthy tells Trump to Stop Claiming ‘No Quid Pro Quo’


. . . The president’s defense here is not that there was no quid pro quo. It is that the quid pro quo does not come close to an impeachable offense. I will address why in part two of this series.

Hot Air parrots the NYT, Giuliani Is Drawing Attention To Hunter Biden’s Work In Romania. But There’s A Problem. Giuliani did some work for some of the same people. But at least Giuliani actually does work.

On the white house spy "whistleblower", WaPoo, Democrats say whistleblower’s testimony is unnecessary as other witnesses come forward. CR, Top impeachment committee Republicans to Schiff: Bring in the whistleblower and They’re trying to take out your president, and they don’t want you to know who the whistleblower is. Yep.

New: Top Rs on 3 impeachment cmtes ask Schiff to set up testimony from whistleblower complaint sources: cmtes "ought to fully assess the sources and credibility of the employee"

Says failure to do so would be "evidence of your denial of fundamental fairness and due process." pic.twitter.com/ggqKtHDqAO
— Nate Madden (@NateOnTheHill) October 23, 2019

Adam Schiff isn't allowing Reps. to see the transcripts from this impeachment inquiry, but selectively leaks small portions to the press. This process should be transparent to the American people. It should be a fair process w/ clear rules, just like past impeachment inquiries. pic.twitter.com/Rg2AKtRHIM
— Rep. Dan Crenshaw (@RepDanCrenshaw) October 23, 2019

From WSJ's  David B. Rivkin Jr., Elizabeth Price Foley, This Impeachment Subverts the Constitution. Breitbart, Levin: House Dems Seized Control of the Instrumentalities of the House, Bastardized the Impeachment Clause for 2020 Advantage

Althouse, "If Senate Republicans vote to remove Trump on anything like the current facts, even the worst interpretation of them, it would leave the GOP a smoldering ruin." 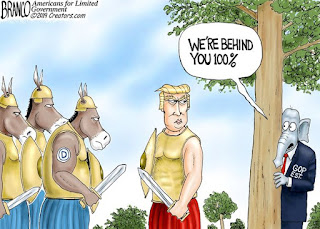 "It wouldn’t matter who the Democrats nominated for 2020. They could run Bernie Sanders on a ticket with Elizabeth Warren and promise to make Alexandria Ocasio-Cortez secretary of the treasury and Ilhan Omar secretary of defense, and they’d still win. A significant portion of the Republican party would consider a Senate conviction of Trump a dastardly betrayal.... Trump himself isn’t going to get convicted by the Senate and say: 'Well, I’m a little disappointed, to be honest. But it was a close call, and Mike Pence is a great guy, and I’m just grateful I had the opportunity to serve in the White House for more than three years.' He won’t go away quietly to lick his wounds. He won’t delete his Twitter account. He won’t make it easy on anyone. He will vent his anger and resentment at every opportunity. It will be 'human scum' every single day. And it’s not as though the media are going to lose their interest in the most luridly telegenic politician that we’ve ever seen. The mainstream press would be delighted to see Trump destroyed, yet sad to bid him farewell. The obvious way to square the circle would be to continue to give Trump lavish coverage in his post-presidency. He’d be out of the White House but still driving screaming CNN chyrons every other hour."
Writes Rich Lowry in "The Problem with President Pence" (National Review). 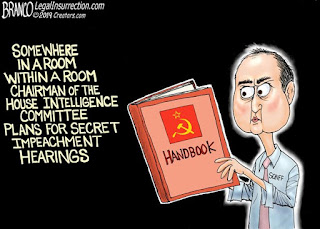 Trump conducted a hostile takeover of the old GOP, which was in the business of losing slowly. Many of us won't be happy to go back. Power Line, Behold the Lord, Part 1


The Democrats have been talking about impeaching Donald Trump since before he took office. I think everyone understands that what is going on now is simply an attempt to overturn the 2016 presidential election, which the Democrats have always regarded as somehow illegitimate. This is the worst breach in our democratic traditions since the Democrats argued that the election of Abraham Lincoln was illegitimate in 1860.

More from Kim Strassel, who makes the point that the Democrats’ refusal to vote in favor of conducting an impeachment inquiry means that they are unmoored from any historical precedent: “Normally an authorization vote would be followed by official rules on how the inquiry would proceed. Under today’s process, Mr. Schiff gets to make up the rules as he goes along. Behold the Lord High Impeacher.”

AllahPundit at Hot Air, John Kelly: I Don’t Think Trump Would Be Facing Impeachment If I Were Still There. I disagree. They were going to try to impeach, they just waited for the right time, and seized on the most convenient excuse. JustSecurity. George Washington’s Advisors Agreed: Impeachment Did Away with Executive Privilege But did George Washington agree? Bloomberg, Impeachment Panels Threaten Contempt If Official Defies Subpoena. I don't really see this as news, just another warning shot. Reuters, U.S. lawmakers hear from 'corroborating' witness in Trump impeachment probe. More hearsay is just more hearsay.
Posted by Fritz at 9:36 AM