RCP, Glenn Greenwald: CNN and MSNBC Are Like "State TV" With Ex-Intel Officials As Contributors. He's a lefty, but when he's right, he's right.

Glenn Greenwald called out the media for not apologizing for "lying to people" and being wrong in their years covering the Trump-Russian collusion investigation led by special counsel Robert Mueller. He called on top primetime cable hosts to go before cameras, hang their head in shame and apologize.

"It was continuously on MSNBC which, let me just say, should have their top posts on primetime, go before the cameras and hang their head in shame, and apologize for lying to people for three straight years exploiting their fears to great profit," Greenwald told Carlson. "These are people who are on the verge of losing their jobs. That whole network was about to collapse, this whole scam saved them."

"Not only did MSNBC and CNN use those people as their sources, they hired them as their news analyst," Greenwald said Monday. "So if you turn on CNN or MSNBC, it was basically state TV. It was CIA TV. Three weeks ago, Tucker, three weeks ago, John Brennan was on MSNBC, and he said that he strongly believes that Robert Miller is going to indict members of the Trump family, either before or after March 15 because he's too noble to use the Ides of March for having conspired with Russia."

Kerry Picket at WaEx reminds us Adam Schiff has 2 aides who worked with whistleblower at White House. It was an inside job, and now in a Ridiculous Shift – Adam Schiff No Longer Requires CIA Gossip for Impeachment Testimony…


The shift from sketchy testimony to “Dear Sir” letters was ridiculous in the extreme. So what happens next? Well, this is predictable…. Chairman Adam Schiff now says there will likely be no gossiper testimony because now he doesn’t need it. [@4:52 video]

At Althouse, "Of all the things Trump’s done, why pick on the Zelensky call? It’s as if Trump’s sins had been inscribed on ping pong balls and placed in a big tumbler..."


"... like the kind used to pick lottery numbers. 'And the winner is, "Zelensky phone call on July 25."'OK! Democrats and the press then all agree to get very worked up over the 'systematic attack on American democracy.' I still don’t believe what Trump did is a 'high crime' — that’s my story, and I’m sticking to it. I can think of 10 things he’s done that are worse, including firing Comey. And hiring Priebus. (And, yes, putting the children of families separated at the border into foster care—that was too harsh.) None of these justify removing Trump under the Constitution, or else every president in my lifetime would have been the subject of ongoing impeachment proceedings—which may be where we’re headed. Always Be Impeaching."

It has more to do with timing than the actual crime. If it's too close to the election it looks too much like an excuse. They timed it. More from Althouse, This still doesn't answer the question — wafted at the recent Trump rallies — "Where's Hunter?" "I'm reading "Hunter Biden to Leave Chinese Company Board, His Lawyer Says/He plans to resign from the BHR board of directors on or by Oct. 31, his lawyer said in a statement" (NYT)." It's a little late to avoid to look of conflict of interest.

LOL. Media looks to be a wee bit triggered by an oped that makes the point (among others) that media is repeating its Russia-collusion hoax methods with Ukraine story.... https://t.co/rBJCSI7ZDt
— Kimberley Strassel (@KimStrassel) October 11, 2019

At Mediaite, Biden Takes Shot at Trump Family After Question About Son Hunter: None of My Kids Will Have White House Offices. Nope, they'll just be on fat retainers from all America's enemies. But then it Turns out Biden's family not the only one to benefit from Ukrainian fossil fuels. Pelosi's kid is getting in on the action too. But WAYNE ALLYN ROOT insists The Real Ukraine Scandal Leads to the Clinton Foundation. (Gateway) Doesn't it always?

The Daily Wire, Rand Paul Calls For Probe Into 4 Democratic Senators Over Threats To Ukraine

Rand Paul: “Four senators, Democrats, wrote a letter to the Ukrainian government and said, ‘If you don't keep investigating Trump we may reconsider our bipartisan support for your aid ... Someone needs to actually, in an objective way, evaluate [the] letter ... That's a threat’” pic.twitter.com/59kyjIN46N
— Ryan Saavedra (@RealSaavedra) October 13, 2019 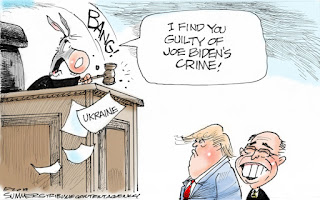 
After President Trump’s July 25 call with Ukrainian President Volodymyr Zelensky, it was reported to then-senior National Security Council (NSC) leadership that an NSC staffer had relayed information about the call to individuals outside the NSC -- and characterized the president's conversation as "outrageous," sources familiar with the matter told Fox News.

The development comes as Fiona Hill, a former special assistant to the president who worked on European and Russian affairs, is set to give a deposition next week. Fox News has reached out to Hill for over a week with questions about whether she helped prep for the July 25 call or received any readout of the call.


An ethics complaint has been filed against Oregon Congressman Earl Blumenauer. Gordon Sondland’s involvement with Provenance Hotels, a Portland-based company, caused the congressman to call for a boycott of the hotel chain. Now the company’s president is calling the hyper-partisan move a “politically motivated campaign of intimidation.”

Sondland is the United States Ambassador to the European Union. He is the founder and chairman of Provenance Hotels. He was a major donor to Donald Trump’s 2016 presidential campaign and donated $1 million to Trump’s inauguration. Sondland is in the middle of Trump’s impeachment inquiry over his text messages about an alleged quid pro quo offered by President Trump to Ukrainian President Zelensky. Rep. Blumenauer called for a boycott of the hotel chain in retaliation against Sondland heeding the instructions from State Department against testifying. Blumenauer issued a statement and also called for a boycott on Twitter.
. . .
This is what politically motivated retaliation looks like. The 1,100 jobs in the balance of ordinary working people trying to keep food on the table for their families may be collateral damage of a Trump deranged politician’s unethical actions. Boycotts are one thing, boycotts called by American politicians against American companies is unacceptable and unethical behavior. 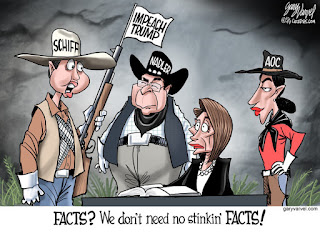 Hot Air cites the NYT so you don't have to read it, In Show Of Support, Trump Meets With Giuliani Over Lunch

From the nutcase wing of the Democratic party, Tlaib says Democrats have discussed detaining White House officials who don't testify. Kimberly Strassel reports from Inside the media’s relentless crusade to destroy President Trump


I’ve never engaged much in media criticism, because it’s almost too obvious. Yes, the mainstream media is liberal and biased. But at least in the past, that bias was largely a function of insularity. Most reporters weren’t even fully aware they were prejudiced politically; everyone they worked and socialized with held the same left-of-center views.

That’s changed in the age of Trump. The press has embraced its bias, joined the Resistance and declared its allegiance to one side of a partisan war. It now openly declares those who offer any fair defense of this administration as Trump “enablers.” It writes off those who question the FBI or Department of Justice actions in 2016 as “conspiracy” theorists. It acts as willing scribes for Democrats and former Obama officials; peddles evidence-free accusations; sources stories from people with clear political axes to grind; and closes its eyes to clear evidence of government abuse.

This media war is extraordinary, overt and increasingly damaging to the country. 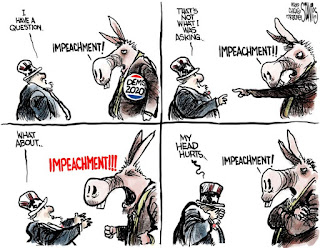 
Producers of the Flailing Impeachment Inquiry by Clarice Feldman at AmThink.