Remember that great fishing trip I had on Tuesday? Well, one of the other anglers wrote it up for DNR: Specktacular Speck Fishing by Tim Campbell

October 1, 2019 was a banner day for speckled trout fishing around the Islands south of Hooper's. Special thanks to Captain "Walleye" Pete Dahlberg for guiding his intrepid 5-man crew of Eric, Fritz, John, Mike and myself to some of the best speckled trout fishing we've ever experienced. We caught about 40 specks, some over 20 inches long, all on artificial lures and released most of them, keeping only a few for the table. Before we searched for specks, the day started by casting swim baits and metal spoons to breaking fish under working birds on the Western shore side of the bay near Point No Point. After catching and mostly releasing numerous bluefish, small striped bass and some big Spanish mackerel for a couple hours, it was time to head east for the Islands. The first few stops did not produce any specks but before long Captain Pete put us on some spectacular speck action. This fishing trip was one for the books and certainly the best speckled trout fishing I've ever experienced. Pete said it was the best speck day he's had in 5 years. What a trip! 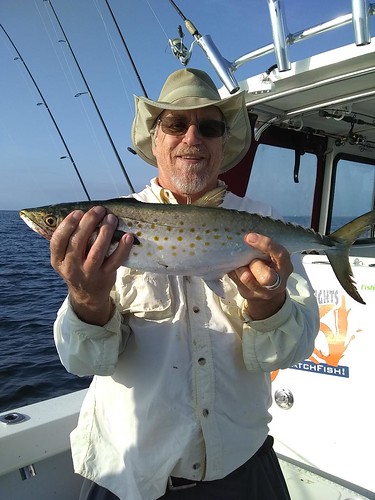 Why is my shirt always half untucked?


And I cut the tail off his speck. It's hard to see phone screens in the bright lights.