The Trump Administration’s immigration crackdown is causing concern on Maryland’s Eastern Shore. Crab processors fear the heated climate over immigration could impact a legal visa program that brings in crab pickers from Mexico.

Bill Seiling is the executive director of the Chesapeake Bay Seafood Industry Association, “we may get lumped in with this whole immigration issue and sort of get tarred with the same brush.”

Processors say H2-B visas are essential to fill the crab picking jobs, that there are not enough Marylanders who are trained or want to do them.

Jack Brooks owns the JM Clayton Company in Cambridge, which is the state’s oldest seafood processor.

“We demonstrated year after year that we just do not have the local people to do these jobs and we wish we did,” says Brooks.

He tells WJZ only 16 people applied for 768 open positions last year. The crab pickers typically come from Mexico in April and leave by November. The government allots 66,000 open visas nationwide, but the positions are filling up fast. Last year, crab processors got an exemption to bring in Mexican workers they hired in previous seasons, but they fear that may not happen this year.

“Right now our banker– people that we need to borrow money to buy a truck or make some improvements around here, they read the papers– they hear what you and I hear. They say ‘Jack are you guys going to be in business next year?'” says Brooks.

Seafood processors say their business could die in Maryland without legal immigrant workers and stress this issue is far different from the undocumented immigrants coming into the United States. Rising tensions between the U. S. and Mexico are also contributing to their worries. 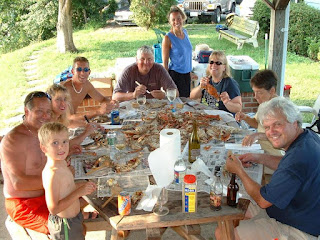 I remember when the Eastern Shore crab processors relied on a large work force of mostly black women from the region to pick the crabs. Did the welfare state or the downward pressure on wages from the immigrant pickers kill that? Why choose one, pick the healing power of "and".

How long before a robotic crab picker replaces them all?

That was Alaskan Snow crab. The steps in picking Blue Crab are more numerous, but not beyond the scope of automation:

Pretty much how I do it. In Maryland, it's considered pleasant to wile away an afternoon picking crabs like that, eating them with butter and Old Bay, and drinking copious quantities of beer. It could get a little tiring day after day, if you couldn't eat the crabs and drink the beer.
Posted by Fritz at 5:29 PM