You all know that California, up until recently, had been in the throws of a historic (although not geologically unprecedented) drought. However, a few weeks ago, the weather patterns shifted to a "Pineapple Express" pattern which tends to sweep moisture laden air from the Hawaii area up to the Pacific Northwest, causing repeated strong rainstorms, as well as the much more badly needed snow in the Sierras, which act as long term water storage.

By way of Watts Up With That, this convenient diagram showing the recent changes in drought conditions:

Which show how the drought is essentially gone from the north of the state, and much relieved in most of the remainder, with reservoirs being refilled, in many cases above their historical average storage: 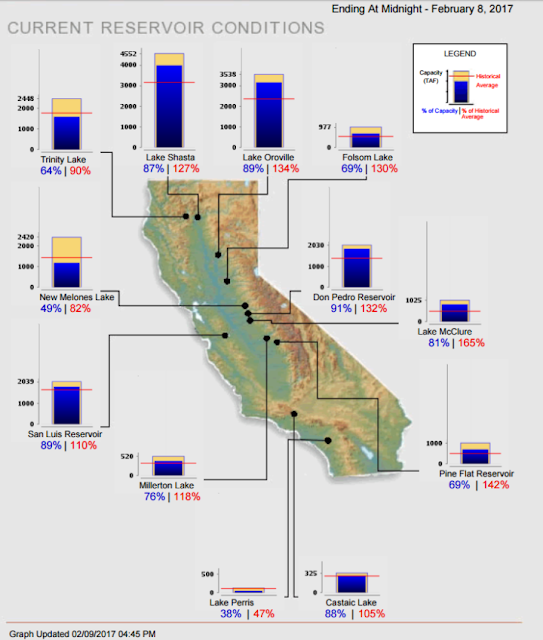 Now we here that the spillway at the nation's tallest damn at 770 ft, Oroville, is in the process being eroded away, threatening the integrity of the damn itself, and causing 188,000 people to be evacuated, and 23,000 National Guard to be put on stand by (I figure they can plug 184,000 holes in the damn).

The spillway was been all but destroyed, and the emergency spillway has been opened, and is itself being eroded:

And it's not just the dams that are being threatened. There is widespread flooding in the Sacramento River Delta (I hope the smelt are enjoying it). Ted sent me this link to a series of pictures from a fly over:

Hopefully Ted will send a picture of New Melones Lake, which he crosses daily on his way to work, and has been recording occasionally to show the drought.

After they get through this rough patch, California might want to seriously consider upgrading it's water resources, before boring a hole through earthquake prone mountains for the "train to nowhere".