Because we're all getting tired of being forced to care listen to the press go on about the issue of the year, "transgender rights". 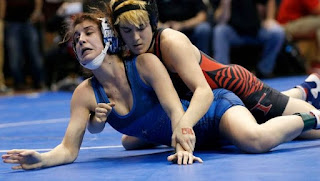 After the match, Clay followed suit with the other wrestlers who have been pitted against Beggs, a female transitioning to a male more than a year into testosterone treatment, and declined to speak with reporters and was quick to exit the competition area at the Berry Center in the Cypress-Fairbanks school district. 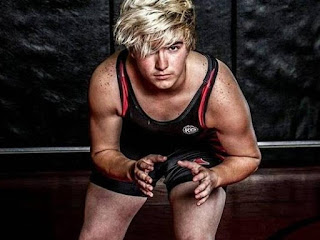 Other than more television cameras and reporters hanging around Beggs' matches, the state tournament has been mostly routine despite the controversy swirling around Beggs' gender and the UIL rule that forces him to wrestle as a girl and against girls.

Fans mostly cheered after Beggs' victories, but there were some outliers.

One woman during Friday's action could be heard after Beggs’ victory over Mya Engert yelling at the Tascosa wrestler, “At least you got out there.”

At the regional tournament, two wrestlers forfeited rather than grapple with Beggs. One, Coppell’s Madeline Rocha, who had already qualified for state, lost her opening-round state match Friday.

After losing to Beggs, who has has been on testosterone treatments since October 2015, Engert left the mat in tears and her coach tersely declined an interview request for her wrestler. Many of the coaches have said they’re not upset at Beggs, but just the predicament of their girls having to wrestle against an athlete on testosterone.

In a reasonable world (aside from the all around unreasonability of sex conversion therapy and surgery) she/he would have been given the choice between wrestling and her hormone treatments. It's high school; it ain't that important. But no, now thanks to the "movement" her "right" to take hormones and compete in the sports at the same time result in the denial of fair treatment, all the "normal" girls in the wrestling world are to be placed at an enormous disadvantage in strength.

Put a big asterisk after her/his name on the plaque.
Posted by Fritz at 11:23 AM