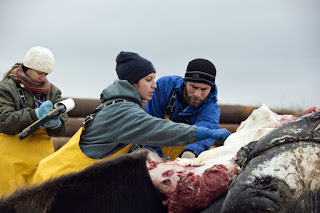 The whale – 33 feet long and an estimated 10,000 pounds – was towed to a beach on Craney Island in Portsmouth, where it will be buried once the necropsy is complete.

During an exterior examination Thursday afternoon, Costidis and his team found four large lacerations consistent with a large ship propeller. One, about six feet long, was so deep that the animal’s stomach and some intestines had spilled out. 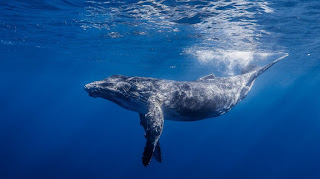 Stay away from the big boys.


Costidis and his crew took tissue and blood samples from all the vital organs. He expected the process to take three or more hours.

He was hesitant to say conclusively that the whale died from the propeller wounds.
“It could have died first, then gotten hit by a boat,” he said. “We just won’t know for sure until the lab work comes back.”

Costidis said humpbacks don’t have the same kind of sonar other marine mammals do, and that could lead a whale to get hit by a boat. The area’s murky water increases that probability. And the fact that humpbacks have been feeding around the shipping channels leading into the Chesapeake Bay for the past couple of months further lends itself to the propeller theory.

“We’ve seen this whale before,” Costidis said. “The Duke (research team) has cataloged this whale, but I’m not sure what the number is. He was seen off the coast last month.” 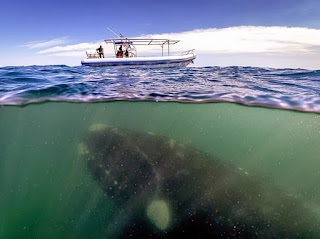 Smithsonian research associate Charley Potter said the baleen can be used like the rings in a tree to age a whale. “The baleen records a lot of information,” he said. “We’ll be able to tell what the whale had been eating and where it has been feeding. We’ll be able to find out if it was stressed before it died and how close to puberty it was. We’ll also know what kind of contaminants were in the waters it was traveling in.”

Potter said the animal’s ear wax also will provide a wealth of information. And he found two different types of barnacles on the whale’s fluke that will help him discover where it spent most of its young life.

Who knew whale ear wax was a thing?
Posted by Fritz at 4:34 PM