Some protesters have decided to end their time at the camp by burning down structures that were built on the site. From the Associated Press:


Some of the praying protesters said burning the structures — which appeared to include a yurt and a teepee — was part of the ceremony of leaving. As heavy rain turned to snow, some said they expected no trouble during the eviction, despite a heavy law enforcement presence.
“People are being very mindful, trying very hard to stay in prayer, to stay positive,” said Nestor Silva, 37, of California. “I am not aware of any plans for belligerence.”…
Dom Cross, an Oglala Sioux from Pine Ridge, South Dakota, said he planned to return home after living at the camp since September.
“There’s a lot of sadness right now. We have to leave our second home,” he said. 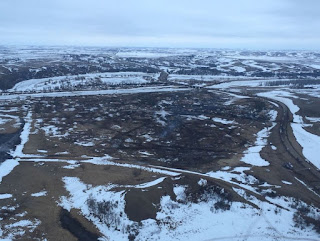 After months of showdowns with police, local law enforcement will finally clear the camp today. Authorities are being gracious to the exiting protesters. There will be buses provided to give them a ride to Bismark, ND. Each protester will be given food, a voucher for one night in a hotel and a bus ticket to take them anywhere in the United States. Fox News reports that authorities are even offering some kind of symbolic arrest aimed at giving the protesters something akin to an honorable way out of the protest. However, anyone who stays past today’s 2pm deadline and refuses the offer will be arrested and charged. One way or another, the camp will be cleared out today.

Once it is empty the work of cleaning up the mess left behind by up to 10,000 protesters will continue. The area where the camp is located is in a flood zone that washes into the local river. There is concern that abandoned cars, garbage and human waste could all wind up in the river if it is not removed before flooding takes place.

Now, that's some real environmentalism there. 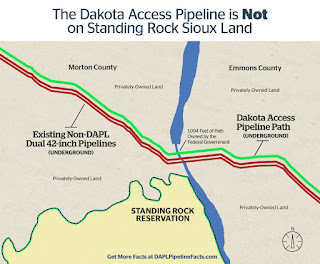 Does anyone recall the origin of the standoff at Malheur National Wildlife Refuge? I do.


In 2012, Dwight Lincoln Hammond, Jr., 73, and Steven Dwight Hammond, 46, were both convicted of two counts of arson on federal land, in relation to two fires they set in 2001 and 2006. In a mid-trial settlement agreement, the Hammonds agreed to not appeal the arson convictions in order to have other charges dismissed by the government. The Hammonds were also told the prosecutor would seek the mandatory minimum sentence of five years. Ultimately, Dwight Hammond was sentenced to three months' imprisonment and his son Steven was sentenced to a year and a day's imprisonment, which both men served. However, in 2015, the sentences were vacated by the United States Court of Appeals for the Ninth Circuit, which then remanded re-sentencing. In October 2015, a judge re-sentenced the Hammonds to five years in prison (with credit for time served), ordering that they return to prison on January 4, 2016.

The Hammonds were charged under anti-terrorism laws for starting brush fires on their own land that inadvertently spread into the adjoining wildlife refuge, fires which they put out after a few acres of brush were burned, with no help from the government. The Bundy's seized on this incident as an example of how the Federal Government was oppressing ranchers.

I'll bet none of these protesters will be charged under that law. Instead they get free bus tickets home. None of them were shot to death.


Many of the 200-300 protesters remaining at the Dakota Access Pipeline main camp, known as Oceti Sakowin, packed up and left yesterday. Some chose to burn down shelters they had built over the past several months on their way out. But a few holdouts remained today so police moved in and cleared the camp one final time. From the Seattle Times:


Police moved on the camp Thursday morning in dozens of armored personnel carriers, as a helicopter and fixed-wing airplane circled overhead. Police moved tent to tent and shack to shack with guns drawn, clearing out demonstrators. By 2:09 p.m. Central Time, it was over.
As many as 100 demonstrators were in the camp, according to activists, but authorities estimated 50.

Apparently 39 people were arrested today. Authorities had previously offered anyone who wanted to leave some food, a hotel voucher and a bus pass to anywhere in the country. Total cost of the cleanup of the site is starting at $800,000 though it’s believed that could go as high as $1.2 million by the time everything is done. Meanwhile, environmental groups such as 350.org which supported the protest are vowing to continue the fight. . .

I hear the Indians were getting pretty tired of the filthy hippies.
Posted by Fritz at 5:44 PM