Democrats, the party of science! A Nationwide Network of Witches Plan to Hex Donald Trump


Starting at midnight on Friday, witches around the country are calling for a mass spell to be cast on Donald Trump every night of a waning crescent moon until he's driven from office.

The spell was publicized by Michael M. Hughes, who told ELLE.com that it was tweaked from multiple spells he saw going around private witchcraft groups. He published it on Extra News Feed because he felt "it would be very welcome to a lot of people." It quickly spread, with events being formed around the country and support on social media. 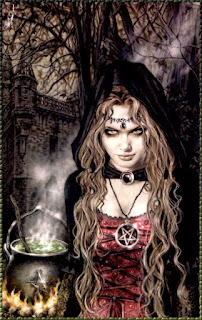 Hughes explained that he chose a binding spell because "we're not wishing harm on anyone, we're just trying to stop the harm they're doing. It's not the equivalent of punching a Nazi in the face, it's the equivalent of tying him up and taking his bullhorn away."

The ritual itself is pretty standard magic working, binding Trump from doing harm to others and to himself, rather than asking any forces to do harm to him. There are objects to represent the elements and to represent Trump himself. The tarot card of the Tower represents ambitions built on lies, which are struck down by a lightning flash of truth. For those who believe in witchcraft, it looks to be an effective spell.

Wow, the Tower! It must be effective. The science is settled! Wombat-socho has "Rule 5 Sunday: Massachusetts Girl" ready at The Other McCain.