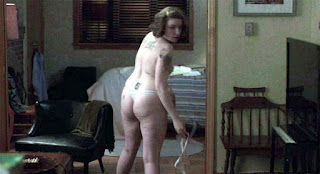 “I think it’s really important to remember that it is an incredible problem that . . . 53% of white women in this country voted for Donald Trump which means that they’re not only voting against the interests of their sisters, of women who may not look like them, who they may not understand but whose rights are just as important, but also remember that they are in that case voting against their own best interest. To me a part of feminism — it’s almost like being a parent to a teenager where they’re so mad at you, they think you’re such a piece of crap and you’re like, I know you hate me right now but the reason I’m doing this is because I love you and I want us all to be safe. . . .
I think what’s really hard, obviously it pains me as a Caucasian women to think about how many women didn’t think about women who looked different or had different life experiences than them. They didn’t look outside their own back yard when they made the choice to vote for Donald Trump. . . .
I also think it’s really important to understand so many women aren’t raised with the rhetoric of self-empowerment. The messages they’re hearing from Donald Trump may be very similar to the messages they’ve always heard from their fathers, from their brothers, from their husbands. They haven’t been given the message that they do matter. And so, while I think we have an incredible amount of work to do with enlightening those women, I also have sympathy for the societal structures that keep them from understanding what they need to keep themselves safe.

There, you got it in after all.

With the likes of  Lena Dunham campaigning for Clinton, is it any surprise a majority of white women voted for Trump
Posted by Fritz at 10:58 AM