The Fake News on Fukushima

I've seen links to this on Drudge, and in Facebook, and even seen a citation to it in a Facebook comment, and its debunking needs wider coverage: Relax, That Scary Fukushima Headline Was Fake News

On February 8, Adam Housley of Fox News reported a story with a terrifying headline: "Radiation at Japan's Fukushima Reactor Is Now at 'Unimaginable' Levels." Let's just pick up the most exciting paragraphs:


The radiation levels at Japan's crippled Fukushima nuclear power plant are now at "unimaginable" levels.
[Housley] said the radiation levels -- as high as 530 sieverts per hour -- are now the highest they've been since 2011 when a tsunami hit the coastal reactor.
"To put this in very simple terms. Four sieverts can kill a handful of people," he explained.

The degree to which this story is misleading is amazing, but to explain it, we need a little bit of a tutorial
. . .
Let's dispose of the silliest error first: "Four sieverts can kill a handful of people."

Here's what he really means: an exposure to four sieverts total dose will kill about half the people exposed. If you were inside the reactor, after a little over two minutes of exposure the chance you'll die is 50/50.

Showing that the people writing the article had no concept of the idea of radiation intensity versus a fixed quantity that could be divided between a number of people.  You could stop here and know that the rest of the article was idiocy. But wait, there's more: 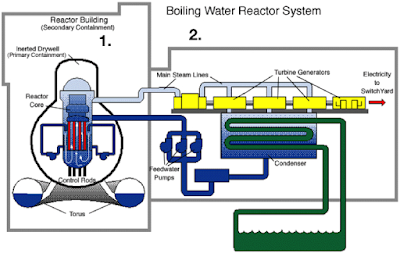 On with the stupidity:

The radiation levels inside Japan's damaged Fukushima Daiichi nuclear reactor No. 2 have soared in recent weeks, reaching a maximum of 530 sieverts per hour, a number experts have called "unimaginable."

Now, let's refer back to the image above. Most commercial nuclear reactors have what's called the "primary containment" around the reactor: a sealed steel or reinforced concrete shell around the actual reactor. Outside that is the "secondary containment," another sealed building surrounding the primary containment. The unexpectedly high radiation levels -- and 530 Sieverts is way high, no question -- were detected inside the containment, the area marked by "1."

This is important, because everyone in Japan is in the area marked by "2.", technically called outside the containment. This is a Good Thing. What's even better is that we now know the radiation exposure in area 2 was only about 15 percent of what was originally thought.

What, you mean radioactive waste (and that's all the reactors at Fukushima are at this point) in the containment is highly radioactive? Yeah, we knew that. What's new is the radiation levels finally dropped to the point that they could send a robot in to read them (just barely):


At Fukushima Daini, they got a robot close enough to measure the radiation level close to the "elephant's foot" -- the mass of slag that results when the reactor melts down. This was very high -- the article mentioned 530 Sieverts, but it's unclear what they mean, because Sieverts are a measure of biological damage, not radiation dose. Still, it's way high. (Reading news reports about these things can be very frustrating.)

But what about that "release into the ocean" I keep hearing about:

"The worry is with 300 tons of radioactive water going into the Pacific every day, what is that doing to the Pacific Ocean?" said Housley.

This, at least, is something we can evaluate.

Radioactivity is measured with two units, the Bequerel and the Curie; the Bequerel is ridiculously small, the Curie ridiculously large. (You can find a long detailed explanation in my article "Understanding Radiation" from the time of the Fukushima accident.) A Bequerel is one decay event per second.

TEPCO and the Japanese government carefully measure the radioactivity in the water being released, and report it regularly. Their February 1 report records only one significant radionuclide in the water: tritium, the third hydrogen isotope. The radioactivity level is between 780 and 820 Bq per liter of water.

What does this mean? Well, the U.S. EPA safety standard for tritium in drinking water sets an upper limit of 740 Bq/liter. Basically, you wouldn't want to drink it, right there at the outflow into the Pacific, for any extended length of time -- although it probably wouldn't hurt you.

So, no, we're not all gonna die from the radiation released into the Pacific Ocean (which is a really huge body of water, 714 million cubic kilometres); we can barely measure it. But don't go into the containment at Fukushima.

This is just click bait for antinuclear activists. Fukushima was never a threat to the Pacific Ocean, let alone now.
Posted by Fritz at 7:59 PM