. . . In situations such as oyster restoration in the Chesapeake Bay, a conservation paleontology approach is necessary to establish a true baseline for the restoration of an ecosystem. Lockwood said that most ecological managers establish baselines based on what the Chesapeake looked like 100 or 200 years ago.

“As a paleontologist, that’s way too young for me,” she said. “I want to understand what the Bay was like before humans started having an impact, maybe 10,000 years ago. I want to look back and see how the ecosystems functioned for thousands and tens of thousands of years. And I want to see how the ecosystem responded naturally to things like climate change and sea-level rise.”

Lockwood offers some tangible evidence of what a prehistoric Chesapeake was like. She shows one of her specimens, an enormous half-million year old oyster, saying, “It could serve as a doorstop.”

Oysters of such a size were the rule, not the exception, in the prehistoric Chesapeake, and Lockwood says that her studies show that the Bay was full of such mammoth oysters. A conservation-paleontology approach provides the necessary context to understand the true baseline ecosystem, she explained.

“We live in the modern times, and we are trapped in the mindset of thinking that what we see today is natural, when in reality humans have been affecting the earth now for  thousands of years,” Lockwood said. “A manager of the Chesapeake Bay has never seen a healthy oyster reef. They’ve never seen anything close to a natural oyster reef. The only way to understand how oysters are supposed to function is to go back in time.” 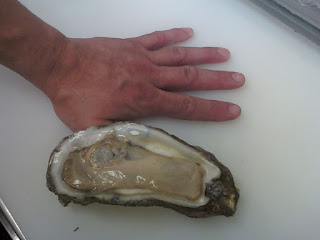 That's an excellent point, even well beyond the bay and oysters. We have literally never seen the "wild" ecosystem of the world; only the most remote areas are beyond the effects of human influence.


Lockwood found that the size of her ancient oysters is solely a function of a long life; the growth rate is no different than the oysters in today’s Chesapeake. Her study includes a range of oyster fossils from Delaware down to North Carolina.

She said that a modern oyster in the Bay lives five or six years, on average, before being harvested or dying of disease. By comparison, her Chesapeake Bay fossil specimens lived particularly long lives.  “We’re talking 30, 35 years old,” she said. “These are big, honkin’ grandma oysters.”

There are no big, honkin’ grandpa oysters. Oysters are sequential hermaphrodites, she explained: They all are born male, then change sexes as they grow to a certain size. Lockwood stressed that individual oyster size has enormous conservation implications.

“Because, if you’re an oyster, the bigger you are, the more offspring you have,” she said. “As these things grow in size, and grow in age, they’re having more and more offspring.”

And there is no way to bring back the big, honkin' grandma oysters without adopting, at a minimum, my plan for oyster conservation; put a ban on the harvest of wild oysters in the bay long enough to establish whether oysters are capable of thriving on their own in the modern bay. Only then, and if the answer is yes, even bother with oyster recovery projects. This article only has the effect for me of broadening the interval necessary to determine the ability of oysters to recover on their own from 5-10 to 20-30 years.
Posted by Fritz at 4:18 PM