There's a lot of news stories and blog posts about the recent discovery of an arguably new potential new human ancestor Homo naledi in fossils from a cave in South Africa (I say arguably because at least one scientist claims that they fit comfortably within the envelope of Homo erectus. Being more inclined to the lumper persuasion of taxonomy than that of the splitters, I tend to think that extraordinary claims require extraordinary evidence. We'll know more as time goes on. Hopefully, they will succeed in dating the fossils, and maybe even getting a DNA sequence (although those chances seem faint given their supposed age).

But I saw this via Maggies Farm, and it seemed a interesting take on the story. Six small, skinny women cavers were chosen to enter the cave and seek the fossils because of the very narrow entrance to the cave, 18 cm, about 0.1 fathoms to us mariner types, or 6 inches English/American.


Lee Berger put his ad up on Facebook on October 7th, 2013. He needed diggers for an exciting expedition. They had to have experience in palaeontology or archaeology, and they had to be willing to drop everything and fly to South Africa within the month. “The catch is this—the person must be skinny and preferably small,” he wrote. “They must not be claustrophobic, they must be fit, they should have some caving experience, climbing experience would be a bonus.”

“I thought maybe there were three or four people in the world who would fit that criteria,” Berger recalls. “Within a few days, I had 60 applicants, all qualified. I picked six.” They were all women and all skinny—fortunately so, given what happened next. Berger, a palaeoanthropologist at the University of the Witwatersrand, sent them into the Rising Star Cave, and asked them to squeeze themselves through a long vertical chute, which narrowed to a gap just 18 centimeters wide. 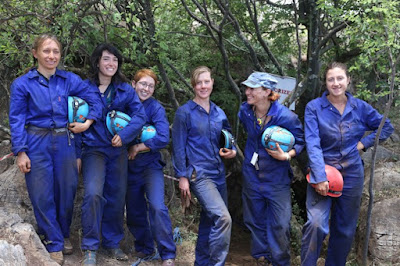 After entering the cave, the team almost immediately hit several narrow, pitch-black corridors, a knife-edge ridge called the Dragon’s Back with steep drops on either side, and finally that 12-meter chute. “It’s a long crack, punctuated by shark-teeth protrusions,” says Elliott. “I remember looking down and thinking: I’m not sure I made the right decision.”

At the bottom, the team eased down into an area they dubbed the Landing Zone, before entering the fossil-filled trove that they called the 101 Chamber. On the first day, they excavated a single bone—a mandible. “It came out and we said: Wait a minute, this isn’t what we thought,” says Hawks. Tucker’s images hinted at an australopith-like jaw but he had forgotten to include a scale bar. The actual specimen was vastly smaller, and its teeth were almost human-sized. “We thought: We’re looking at something special here.”
. . .
By the end of the week, the team had excavated more fossils than had ever been found in a South African site. Shortly thereafter, they exceeded the tally from all of southern Africa from the previous 90 years. It took months to process all the 1,550 or so fragments and assemble them into 15 skeletons—male and female, elderly and infant.

So, who cares if they would make lousy combat marines, they make great anthropologists.

Wombat-socho has the big list, "Rule 5 Sunday: Proudly Encouraging The Male Gaze Since 2009" up at The Other McCain.
Posted by Fritz at 6:10 PM