A Bite of Baltimore?

A 'fishable' Baltimore Harbor, but is it safe?


Now that I've tried it a few times, with a little success, I can say this about fly-fishing for rockfish from the Inner Harbor promenade: You have to watch out for joggers on your back-cast. If you're not careful, you'll hook one, and that could mean litigation, and that could take all the fun out of fishing.

If you've ever seen a fly angler build a long cast over water, you know that, in classic "River Runs Through It" style, the line unfurls as far to the rear as it does to the front, and the back-cast can be tricky if there are trees behind the caster. At Baltimore's Inner Harbor, you have to watch out for lampposts, street signs and tall dogs, in addition to those joggers. 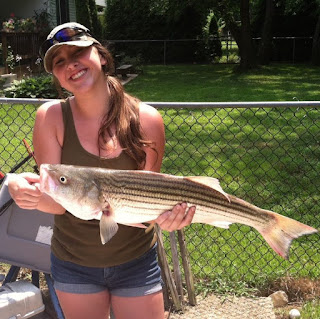 I recommend at least a 12 weight outfit for joggers. And a baseball bat to subdue them at the end of the fight.

And I'll tell you something else: You're likely to catch a striped bass in the 18-to-23-inch range. The Baltimore Office of Sustainability and Blue Water Baltimore have declared a "fishable, swimmable harbor by 2020" as a great community goal. I don't know about the swimmable part, but the fishable looks pretty good. I caught a 20-inch rockfish the other day on my second cast, and he looked as healthy as any striper I've seen taken from the middle of the Chesapeake Bay.

Yeah, it's no secret that keeper Striped Bass haunt the ugly shoreline of Baltimore Harbor. A large group of anglers has been using it for years. In fact, there's a lot of good structure there, and a warm water discharge or two that hold some fish in the dead of winter. 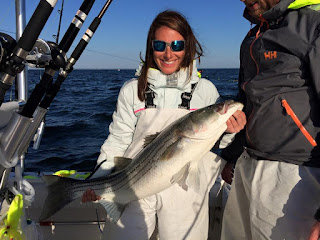 Of course, I know what you're wondering, and it has to do with consumption. As in, "Are you going to eat that?" It's a reasonable question. Anyone who has seen the harbor after a rainstorm would find the prospect of eating a fish from the Patapsco River — that's what the harbor is, after all — unappetizing.
. . .
So I won't eat a rockfish from the harbor because I generally don't eat the fish I catch. However, I don't think it would kill me or anyone else to try. The Maryland Department of the Environment puts out advisories on the consumption of all kinds of fish caught from the bay and its tributaries, and the migratory rockfish scores relatively high on the safety meter. 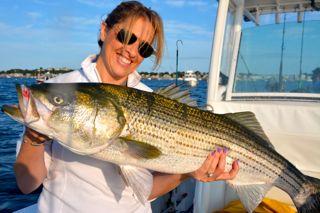 They have a little PCBs and mercury, but not much more than comparable fish their size. The advisories are based on PCBs.

Testing by the MDE in 2011 showed falling levels of contaminants in rockfish. The department raised its recommended monthly meal limits; rockfish of the size Wolf catches in the Inner Harbor (less than 28 inches long) can be consumed safely up to three times a month, the agency said. It's safer still if you take the time to remove the dark, fatty areas of the fish and eat the fillets.
. . .
Wolf does not eat the rockfish he catches, nor does he prepare it at Chiapparelli's. "But," he says, "for 10 years I've been taking them to one of the women at work. She eats them all the time, and she is not glowing and can't wait until I bring her more."

Stripers, particularly the larger ones, are on the move all the time, and though they may spend a few weeks in one area, they're rarely stay in one place long enough to pick up significant amounts of local contaminants.  The ones they have, mostly PCBs, are widespread, and present in the food they eat everywhere.

On the other hand, stripers aren't the best eating fish. Throw a few back for me to catch later.

Wombat-socho links this in "Rule 5 Sunday: Monkey Boy Don’t Care."
Posted by Fritz at 6:00 AM