Presidential candidate Hillary Clinton finally apologized for her use of a private email server while secretary of state in an interview with ABC on Tuesday.

“That was a mistake,” Clinton said. “I’m sorry about that, I take responsibility, and I’m trying to be as transparent as I possibly can.”

The clip was an excerpt from an interview with ABC World News Tonight anchor David Muir, which is slated to broadcast in full Tuesday night. It marks a major change in rhetoric for Clinton, who has been adamant that nothing she did regarding her use of a private server merited an apology.


In extensive interviews by telephone and at their Brooklyn headquarters last week, Mrs. Clinton’s strategists acknowledged missteps — such as their slow response to questions about her email practices — and promised that this fall the public would see the sides of Mrs. Clinton that are often obscured by the noise and distractions of modern campaigning.

They want to show her humor. The self-effacing kind (“The hair is real, the color isn’t,” she said of her blond bob recently, taking note of Mr. Trump) has played better than her sarcastic retorts, such as when she asked if wiping a computer server was done “with a cloth.”

They want to show her heart, like the time she comforted former drug addicts in a school meeting room in New Hampshire.

How many times can they roll out "The New Hillary Clinton"?


The U.S. State Department plans to move about 50 workers into temporary jobs to bolster the office sifting through Hillary Clinton's emails and grappling with a vast backlog of other requests for information to be declassified, officials said on Tuesday.

The move illustrates the huge administrative burden caused by Clinton's decision to use a private email address for official communications as secretary of state and a judge's ruling in a Freedom of Information Act (FOIA) lawsuit that they be released.
. . .
The extra staff will not work on the monthly, court-ordered release of Clinton emails, which are being handled by about 20 permanent, and 30 part-time, workers, officials said. The new staff will fill in for those workers and may also handle other Clinton FOIA requests.

That's a lot of personpower. You know, sometimes, not always, it's easier not to make the mess than to clean it up afterwards,

Speaking of transparency, it's nice to know that the State Departments chosen Transparency Czar, the woman chosen to straighten out the mess caused by Hillary Clinton, maxed out her personal contributions to Hillary's campaign just a few months ago: 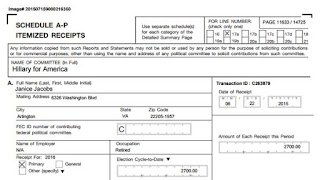 Secretary of State John Kerry is tapping a “transparency” czar to oversee the department’s preservation of documents.

Ambassador Janice Jacobs, a former career diplomat, will serve as the State Department’s first “transparency coordinator,” Kerry announced Tuesday.
. . .
The State Department’s response, and Jacobs’, is that this is just a logistics job with no sway over what is released and what is not, and the donation happened literally whole weeks before she was even approached about this. . .

Now this is a good idea. Get him under oath. I don't really care what data crimes he committed; he did them at Clinton's behest: Senators consider immunity to get Clinton aide to testify in email scandal


Two top Senate investigators floated the idea of immunity Tuesday to Bryan Pagliano, the staffer who set up the email server in former Secretary of State Hillary Rodham Clinton’s home, in exchange for testimony about her activities.

Mr. Pagliano last week said he would assert his Fifth Amendment right against self-incrimination in refusing to answer questions about the matter, but Sens. Chuck Grassley and Ron Johnson, the chairmen of two key committees investigating the situation, said they have authority to extend immunity if Mr. Pagliano is willing to talk.


It appears now that Hillary Clinton’s main rhetorical defense against the increasing evidence that her private server contained classified information is that it wasn’t “marked classified.” A fair number of people have been repeating this as if it were somehow significant.

Her defense amounts to a claim that she's either too stupid to know what's important to classify, too lazy to act appropriately, or too important to sanction.

Speaking of the latter: Lawsuit asks how Clinton lawyer got OK to store classified emails

The suit was filed Monday in U.S. District Court in Washington by freelance journalist David Brown, who sent State a Freedom of Information Act request last month asking for all records about the decision to allow Kendall to retain a thumb drive containing copies of about 30,000 emails Clinton turned over to State in December.

Kendall said in a letter to Congress recently that on July 8, the State Department provided him and his law partner Katherine Turner with a safe to hold the drive. He said both he and Turner have "TOP SECRET" clearances.

After a request from the FBI to return all copies of the emails, Clinton instructed Kendall to give up the thumb drive, which he did in early August.

Lawyers who represent clients in national security cases say it's highly unusual for a private attorney to be given permission to hold classified records.

"If one of us tried to do this, we’d have our clearance yanked that very day and have a search warrant served on us and something different happened here," said Brown's attorney Kel McClanahan. "Not only agree did [State] allow him to maintain these records, but it's unclear if they even pushed back. ... We decided somebody needs to get to the bottom of what exactly happened here. What is it: favoritism or did David Kendall somehow satisify some requirement that others of us never even knew to aim for?"

Wombat-socho has the big list, "Rule 5 Sunday: Proudly Encouraging The Male Gaze Since 2009" up at The Other McCain.
Posted by Fritz at 9:02 AM