Remember now Obamacare was going to save the average family $2500 in healthcare costs and stop runaway healthcare inflation? Health plan deductibles are growing seven times as fast as wages 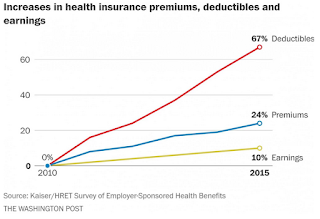 The Kaiser Family Foundation on Tuesday released the results of its annual survey of employer health plans, finding that while there was a relatively modest 4 percent increase in premiums, deductibles have continued a steep upward trend. Deductibles for a single person's coverage have risen nearly seven times as fast as wages and inflation and almost three times as fast as premiums over the past five years.
. . .
Higher deductibles are a tool to reduce unnecessary health-care use, because people are more likely to think twice about seeing a doctor or getting tests they might not need if they are footing more of the bill. But for chronically ill people whose wages are increasing slowly, such increased cost-sharing could be a new financial strain and even a deterrent to seeking care.

I generally agree with the idea of higher deductible, low cost health insurance; but as you can see here, with Obama care, we're getting the worst of both, higher premiums and higher deductibles. How about a system where you get to chose freely among plans that would suit you? What a novel concept.


An Obamacare database storing personal information on millions of Americans including Social Security Numbers was riddled with “basic security flaws,” according to a report from an agency watchdog.

The government stored sensitive personal information on millions of health insurance customers in a computer system with basic security flaws, according to an official audit that uncovered slipshod practices.
. . .
The audit found several vulnerabilities with the MIDAS database. For instance, the Centers for Medicare and Medicaid Services (CMS) did not simulate an attack on the database that would have revealed obvious security weaknesses.

“Our database vulnerability scans identified 22 high, 62 medium, and 51 low vulnerabilities” with the system, the OIG said.

“It sounds like a gold mine for ID thieves,” Jeremy Gillula, staff technologist for the Electronic Frontier Foundation, a civil liberties group focused on technology, told ABC News. “I’m kind of surprised that this information was never compromised.”

And how can you be sure it wasn't. The government is still trying to determine the scope of the OPM hack, and they actually sort of care about that. Your information? No worry, mates.
Posted by Fritz at 11:21 AM