Some exchanges between Hillary Clinton and Chuck Todd this weekend:

Only because it was front and center in your mind the whole time.

This clip also confirms my suspicion that the server was already in place as the email server for the Clinton Foundation, and she simply had her and her aides accounts run out of it. Nothing wrong with Clinton.com, just using it for government business.


Dave Weigel has a piece at the Washington Post titled Republicans are blaming Hillary Clinton for the ‘birther’ movement. That’s wishful thinking. But as John Nolte argues, Weigel has dug up some old material that undercuts the simplistic thesis of that headline.
Weigel’s main claim is that the Birther claim was “never pursued” by the Hillary 2008 campaign proper, but only its supporters:


But the Clinton campaign never pursued the idea that Obama was literally not American, and therefore ineligible for the presidency. A small group of hardcore Clinton supporters did.

Weigel acknowledges that the Clinton campaign discussed Obama’s limited American roots as a “strong weakness,” citing an all-but-forgotten internal campaign memo from Clinton pollster Mark Penn. However, Weigel minimizes the nastiness of Penn’s memo, which is very eye-opening in its frank desire to exploit Obama’s lack of ties to this country. Here’s Weigel:


“All of these articles about his boyhood in Indonesia and his life in Hawaii are geared toward showing his background is diverse, multicultural, and putting that in a new light,” wrote Penn. “Save it for 2050. It also exposes a very strong weakness for him — his roots to basic American values and culture are at best limited.”

But Penn wrote that as a warning, not a strategy.

The memo can be read here, and here is a screenshot of one relevant passage. I dare any fair-minded person to read this and conclude that Penn wrote this “as a warning, not a strategy”: 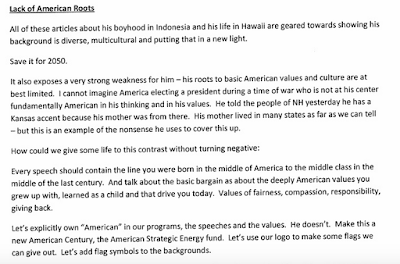 How can we give some life to this contrast without seeming like assholes turning negative?

Always remember, Hillary's troops gave birth to the "birther" movement.
Posted by Fritz at 8:39 AM