Sexism For Me But Not For Thee

Stacy (among others) brings us the story of the British barristeress who accused a colleague of sexism after his having the chutzpah (or whatever the British vernacular is) to comment on that she looked stunning: Objectified by the Male Gaze

Unacceptable and misogynistic behaviour. Think twice before sending another woman (half your age) such a sexist message.
Such was Ms. Proudman’s now-notorious reply to the unfortunate Alexander Carter-Silk, 57, who had made the mistake of telling the 27-year-old radical feminist lawyer that her LinkedIn profile photo was “stunning.” Before analyzing Ms. Proudman’s discourse about “exercising power over women,” let’s clear up the obvious question: Did the married middle-aged Mr. Carter-Silk intend his message as more than casual flattery? Was he hoping to get busy with her?

As a representative of the over-the hill crowd, I'm going with casual flattery. She's moderately attractive but not really that stunning. However, among barristers she might stand out a bit more.

Stacy goes on to assume that as a radical feminist, she must be lesbian:


Milo Yiannopoulos suggests Ms. Proudman would have been flattered by a compliment from a young good-looking man:


On a related note, I suspect that if the male lawyer looked like George Clooney, Ms. Proudman wouldn’t be complaining. But you’re not supposed to say that, are you.

Unfortunately, this suggestion presumes Charlotte Proudman is heterosexual, a presumption for which we have no evidence at all. In fact — if you will re-read what Ms. Proudman wrote — her denunciation of “sexist men . . . exercising power over women” does not even permit us to imagine the possibility that any expression of male admiration would be acceptable to her. We may interpret Ms. Proudman’s discourse as saying that all men who are attracted to women are misogynists, because male heterosexuality requires the “eroticisation of women’s physical appearance,” which is “offensive” to her. Ms. Proudman expanded on this hostile theme in a subsequent Twitter harangue:

To call a woman “stunning” is, according to Ms. Proudman, “demeaning behavior,” “gender control” and “social violence.” Does this strike you as something a heterosexual woman would say?

Given Stacy's extensive experiences with academic feminists, where militant lesbianism goes hand in hand with radical feminist views, the assumption seems at least reasonable, but it turns out to be false, she is at least bi-sexual if not entirely straight:


“My partner gets messages asking if he wants a job at hedge funds, I get propositions from men asking me out. I want a public apology.”

Somehow I overlooked that quote earlier — Ms. Proudman using the male pronoun to refer to her “partner” — which is evidence that she might actually be heterosexual. If true, this would raise the questions, “Why?” and “How?” 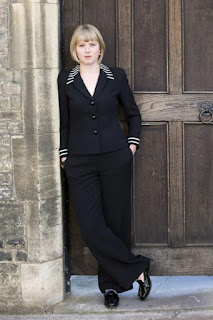 To be fair, she may not have fully found herself yet.

However, Ms Proudman is also a serial sex abuser, by her own standards, having been caught by Britain's Daily Mail of the same crime of admiring a member of the opposite sex online:


However, it emerged yesterday that the award-winning human rights barrister has commented on pictures of men on Facebook herself to praise their looks.

On the profile of a postgraduate student at Cambridge, where Miss Proudman is on sabbatical from her chambers to study for a PhD, she wrote: 'Hot stuff!', while under an image of a long-haired male friend, she wrote: 'oooo lalala!'

One would think a law firm or a school would think twice about hiring anyone, particularly a  lawyer, with skin that thin; it would be a lawsuit just waiting to happen.