UPDATE: Get your free update here! 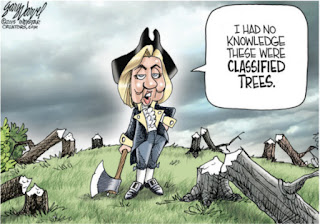 Maybe just that she and her husband lie for the practice? Justice Department on emails: No reason not to believe Hillary


Hillary Clinton's defense in the email scandal received a boost this week when the Justice Department — the same Justice Department that is investigating the email affair — told a court it has no reason to suspect Clinton either deleted or failed to produce any emails under request by congressional or public-interest investigators. "The evidence, if anything, demonstrates that the former secretary's production was over-inclusive, not under-inclusive," top Justice Department lawyers Benjamin Mizer and Elizabeth Shapiro wrote in papers filed in federal court last Wednesday. 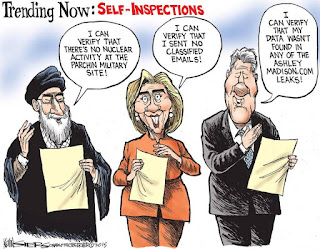 Would you believe that Secretary of State Hillary Clinton sent out NO WORK RELATED EMAILS FOR MONTHS AT AT TIME?

The revelation emerged after a court ordered the release of State Department documents as part of Judicial Watch’s effort to obtain Clinton emails under the Freedom of Information Act.

Emails sent and received by Clinton on her private server are missing over periods totaling five months, beginning when she took office as secretary of state in 2009.

Judicial Watch President Tom Fitton said the gaps indicate Clinton lied under oath when she said all her emails had been turned over, and it suggested government officials had not turned over everything they were required to deliver.

I wonder what else she was doing while she wasn't corresponding with anyone at the State Department about official business. Yoga, marriage plans, collecting dues for the Clinton Foundation? Maybe we'll find out, probably after the election, when the FBI reads the copy of the emails on the magical mystery server. 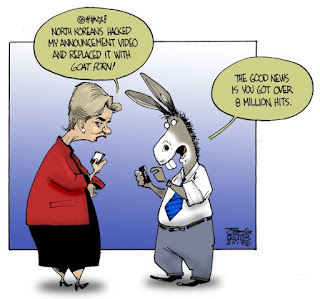 But not all the news about the emails is bad, some was actually sent through sort-of secure email systems: Are Hillary’s classified e-mails on Google, AOL servers?


The good news from Politico’s Josh Gerstein is that some of the classified material transmitted through Hillary Clinton’s secret e-mail server passed through more secure systems as well. The bad news? Those systems are Google’s Gmail, and AOL, among others. Gerstein traced the path of e-mails with classified redactions and found that at least 55 of them went through commercial systems, and the federal government doesn’t seem too anxious to remove them:


Classified emails passed through commercial email services like Google and AOL on their path to or from a private server maintained by Hillary Clinton when she was secretary of state, but so far, the government appears to have done little to retrieve or secure the messages.
A POLITICO review of Clinton emails made public by the State Department shows that at least 55 messages now deemed to include classified information appear to have been sent to or from private accounts other than Clinton’s. That number is certain to grow substantially as State processes all Clinton emails and sorts through emails turned over to the department by several of her top aides.
Only about a quarter of the former secretary’s messages have been released up to this point, and her advisers sent emails on the same topics that never reached Clinton. The nonchalant response to messages stored on commercial servers contrasts sharply with recent FBI efforts to take possession of email copies on a thumb drive maintained by Clinton’s attorney David Kendall and on a server kept by a Denver tech company that managed Clinton’s account.

Neither Google or AOL will delete e-mails without a court order to do so, nor will they allow law enforcement to track it absent such a demand. So far, the FBI and the Department of Justice have not sought that authority.

At least Google encrypts the mail between scanning it for keywords to know what ads to send your way. I wonder what "nuclear weapons" results in?