Remember that study that showed that US Marine combat units with women were less effective than all male units, that women were more often injured, and less physically capable?  He rejects it.


MABUS: It started out with a fairly large component of the men thinking this is not a good idea and women will never be able to do this. When you start out with that mindset you're almost presupposing the outcome.

I have pretty much the same criticism of any study which presupposes women would be equal to men in combat effectiveness, despite many thousands of years of experience.


DAVID GREENE, HOST: Are you saying this was a flawed study?

MABUS: I'm saying that I think that when you call it empirical standards, that it depends on what you put in. And if you look at some of the analysis - some of the outside analysis of this - from Center for Naval Analyses, they've looked at these and they said there are ways to mitigate this so you can have the same combat effectiveness, the same lethality, which is crucial.

GREENE: Well, what's a specific? I mean, what is a specific idea you might have that would ensure that a mixed-gender unit would have the same level of combat effectiveness?

MABUS: Well, for example, part of the study said women tend to not be able to carry as heavy a load for as long. But there were women that went through the study that could. And part of the study said we're afraid because women get injured more frequently, that over time, women will break down more, that you'll begin to lose your combat effectiveness over time. That was not shown in this study. That was an extrapolation based on injury rates. I'm not sure that's right. But it is something that you can set a standard for. But to make that sort of generalization - there were individual women who could meet this standard.

Do men and women overlap in their distribution in strength? Sure, but the men who join volunteer combat units almost certainly tend to be on the high side of the male strength distribution. Let's look at this graphically. Just replace height with strength since this is a conceptual thing; if anything, the difference with strength is greater: 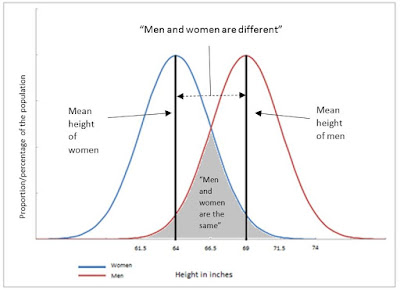 Note that the chance of finding women that match the strength of the upper half of the male distribution is quite small. Hence, out of two dozen carefully selected women, only two made it through the training.

Men and women are physically different. Men are on average larger and stronger, and thanks to the action of the hormone testosterone (an anabolic steroid), of which they also have more, build more muscle faster in response to exertion. It also seems to have behavioral impacts, make men more likely to be aggressive.

Mabus is a Democrat politician, the last non-Republican governor of Mississippi, and a two year naval veteran, having served in the Surface Warfare arm from 1970-72. Women are indeed, as capable as men at reading radar screens and pushing "fire" buttons.

In the WSJ, a woman officer in the army responds: Women in the Infantry? No Thanks
As a former captain and airborne soldier in the U.S. Army, I say be careful what you wish for. and points out an interesting item:


First, opening the infantry to women necessitates revisiting Rostker v. Goldberg, the 1981 Supreme Court ruling that only men are required to register for the draft. If the infantry is compelled to include women, the argument against women registering for the draft will be invalidated. If women are to be treated “equally” and serve in the infantry, shouldn’t they be drafted into the infantry at an equal rate??

It would be interesting to see the response of women to their daughters having to register for the draft at age 18, as all men still do.

She also follows up on the strength argument:


Can the general population of fighting-age American women be expected to perform equally with their male counterparts? According to a U.S. Army Soldier Systems Center study released in 2004, the average fighting load carried by an infantry rifleman operating in Afghanistan was 63 pounds before adding a rucksack. The average approach-march load in combat, which includes a light rucksack, was 96 pounds. The average emergency-approach-march load, which includes a larger rucksack, was 127 pounds.