"IT'S UNAMBIGUOUS EVIDENCE THAT LIQUID WATER IS FLOWING ON MARS​."


In an article published in Nature Geoscience, a team led by Lujendra Ojha of the Georgia Institute of Technology confirms that seasonal flows in mountainous regions of the planet correspond with the presence of briny water. The seasonal flows were first noticed in 2010, with water the strongest suspect. Spectral observations of season data from the Mars Reconnaissance Orbiter indicate the presence of hydrated salts on the surface, or water mixing with a thick brine of salts.

However, the observations don't have a "smoking gun" as to how the flows occur. Some of the hypotheses include an underground aquifer, accumulations of humidity, or possible seasonal melting, though there is a counter for each. (Like an aquifer extending into mountainous regions, possible lack of sufficient humidity, or lack of regional surface ices, respectively.) The team also is working under the idea that it could be a mix of all of these.

Of course, the question will come up: what does this mean for life on Mars? It's an incremental process to find it, first determining whether the conditions are right for it, then determining further if it's present. All Ojha says is that if there is life currently on the surface, these conditions would be the place to look.

I suspect this means that below Mars surface, where it's warmer and at higher pressure than at the surface, liquid water is rather wide spread. This would be moderately good conditions for life to evolve (or persist if introduced). The water is very salty from minerals leached out of the rock, since there's not a hydrological cycle like Earth's to concentrate the salts in the ocean, and allow fresh water to fall on the land. And some of the chemicals would be inimical to most terrestrial life (the perchlorate which apparently quite common on Mar's surface due to extreme oxidizing conditions). But life on Earth manages to get by in boiling sulfuric acid, so there's still a chance. But if we eventually find life there, it won't be Dejah Thoris: 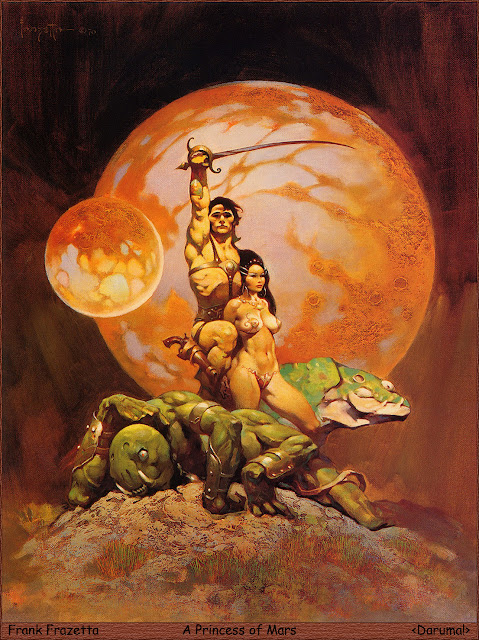 and that's a shame.

Wombat-socho has the big list "Rule 5 Sunday: Time For The Professionals", ready at The Other McCain.
Posted by Fritz at 6:48 PM