Clinton.com: It's Not a Lie If You Believe It

Remember when Hillary said she had turned over all her work related emails to the State Dept? Well, she lied. This one earned a "flaming skull" from Ace: More work emails from Clinton's private account

The Obama administration has discovered a chain of emails that Hillary Rodham Clinton failed to turn over when she provided what she said was the full record of work-related correspondence as secretary of state, officials told The Associated Press Friday, adding to the growing questions related to the Democratic presidential front-runner's unusual usage of a private email account and server while in government.

The messages were exchanged with retired Gen. David Petraeus when he headed the military's U.S. Central Command, responsible for running the wars in Iraq and Afghanistan. They began before Clinton entered office and continued into her first days at the State Department. They largely pertained to personnel matters and don't appear to deal with highly classified material, officials said, but their existence challenges Clinton's claim that she has handed over the entirety of her work emails from the account.

Republicans have raised questions about thousands of emails that she has deleted on grounds that they were private in nature, as well as other messages that have surfaced independently of Clinton and the State Department. Speaking of her emails on CBS' "Face the Nation" this week, Clinton said, "We provided all of them." But the FBI and several congressional committees are investigating.

As Ace notes, this has legal consequences, or at least it would to a normal person:


This has legal consequences: Hillary previously certified, on pain of perjury, to a federal judge that she had now turned over all work related emails, and not just a Whitman's Sampler of them.

The size and scope of the "new email" release?


The State Department informed the House Select Committee on Benghazi on Friday that it would deliver to them approximately 925 new Hillary Clinton emails relating to Benghazi and Libya, among them a small number of Benghazi-related emails that it had missed.
These 925 new emails fall into three broad categories:


1. Benghazi-related emails that the State Department missed in its original review;

2. Hillary Clinton emails related to Libya which the State Department assessed not to be directly related to Benghazi. This makes up the vast majority of the 925 emails being released;

3. Benghazi-related emails that the State Department had previously assessed (PDF) to be of a “personal nature and unrelated to the former Secretary’s official capacity.” 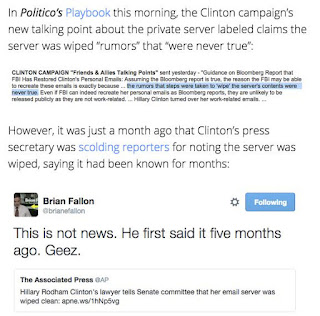 One of the problems with lying is that it always leads to more lying to keep the ball in the air. At some point you have trouble remembering what lies you've told before, and start contradicting yourself. Team Hillary ‘completely changes story’ on wiped server (they’ve REALLY outdone themselves this time)

The Hillary Clinton campaign has apparently given up trying to keep track of what stories they told when and is just winging it from day-to-day:
According to Politico’s Playbook, the Clinton campaign’s “talking points” to spin the report that the FBI was able to recover emails from Hillary’s server are that “rumors” the server was wiped clean “were never true.”

In August, the AP reported that Hillary Clinton’s attorney told Congress her server had been scrubbed:

But now the Clinton campaign’s admission that her server had been wiped clean were just rumors that were never true? They don’t even believe themselves anymore!

Maybe she was thinking if we all thought the server was wiped we'd believe her, and just let it go? Believe her? Now that's funny.

Democrats Wake Up to How Bad a Liar Hillary Is


Democrats are starting to admit that the new scandals involving e-mails and the Clinton Foundation’s conflicts of interest are taking a worrying toll. Democratic Senator Chris Coons of Delaware admitted to the PBS affiliate in his state this week that there has been “a real loss of support by of some of the folks who I had expected would be just diehard, enthusiastic Clinton fans, in part because it’s a reminder of the Clinton era, when there seemed to always be some scandal going on about something.” Coons also criticized Hillary’s attempts at explaining the scandals: “Her answers to it have been less open and artful than I’d expected they would be.”

Many Democrats pine for the days when Bill Clinton could talk himself out of almost anything. Now Clinton biographer David Maraniss says it’s becoming obvious that while Bill is an “authentic phony,” the hapless Hillary is just a “phony phony.”


If this question involved anyone except Hillary Clinton, the answer would be an unqualifiedyes. As it is, though, the FBI has treaded very carefully on questions of suspected criminal action in the dissemination of sensitive material through Hillary’s unauthorized and unsecured private e-mail server. The New York Times’ Eric Lipton and Michael Schmidt report that investigators still have not targeted Hillary herself in the probe into classified material on and through her secret server, but they may start probing her aides at the State Department:


The email described a deteriorating situation in Libya, with snipers shooting people in the streets as rebels tried to unseat President Muammar el-Qaddafi and worried American diplomats in the midst of a “phased checkout” from Benghazi. It arrived in the private email account of Secretary of State Hillary Rodham Clinton, one Sunday morning in April 2011, with unforeseen consequences.
That email, which included an update from the Africa Command of the Department of Defense detailing Libyan military movements, is part of the evidence that law enforcement officials say the F.B.I. is now examining as it tries to determine whether aides to Mrs. Clinton mishandled delicate national security information when they communicated with their boss.
The Libyan dispatch, written by an aide to Mrs. Clinton and then forwarded to her by Huma Abedin, one of her top advisers, should have been considered classified, according to intelligence officials. And, they say, other emails to Mrs. Clinton they have found, including one addressing North Korea’s nuclear weapons system and a third discussing United States drone strikes in Pakistan, should have been marked “Top Secret.”. . .

The response from Team Hillary was, predictably, that no one did anything wrong ever. The State Department responded by disputing whether the information in the e-mails were really classified, or in the public domain — even the e-mail that discussed North Korea’s nuclear weapons and satellite data, which two intelligence Inspectors General marked Top Secret/Compartmented when they reviewed it. Their argument is that if none of this was actually classified at the time it was sent, then no crimes have been committed.

The real question is whether or not Obama wants to throw Clinton to the dogs, and let Biden and whatever black communist Obama designates as his heir rule in his place. I think, in characteristic Obama style, he's still dithering.
Posted by Fritz at 8:05 AM