As I have pointed out before, the Bay Journal is the house organ of the EPA Chesapeake Bay Program (with a little added funding from NOAA) and it's pretty safe bet that whatever they are pushing is at least not beyond the range of thinking at the federal level. This week, they are trying to agitate for a halt to further chicken farming on the Chesapeake. 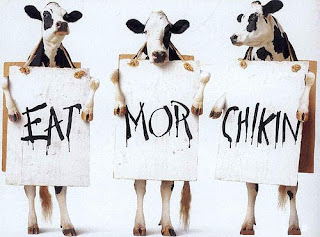 
A coalition of environmental organizations on Tuesday will call for Maryland to consider an immediate moratorium on allowing more poultry houses to be built on the Eastern Shore.

The groups are responding to a report from the Washington-based Environmental Integrity Project that raises concerns about the number of poultry houses that have been permitted during the past two years. That, in turn, could increase the amount of manure that will need to be transferred to other farms within the Delmarva Peninsula, where large amounts of land are already saturated with phosphorus from chicken litter.

Maybe we should try the gypsum cure. What if it worked? Then they'd have to stop the war on agriculture.


Maryland produced 305 million chickens in 2013, with the vast majority of its production coming from its eight Eastern Shore counties where 361 operations generated 215,349 tons of chicken litter containing more than 5 million pounds of phosphorus. About three-quarters of that phosphorus went to other farms on the Shore.

Only 5 lbs of phosphorus waste for 305 lbs of chicken sounds pretty efficient to me.


Adding to the problem is the rapid increase in the number of poultry houses that have been permitted this year. Somerset County alone has approved close to 70; Accomack County, VA, has 84 in the pipeline; Kent, DE, is looking at 50. If all those poultry houses come online, the EIP report estimates they will increase chicken production by nearly 27 million birds.

It's all very well to call on farmers to produce food as cleanly as possible. It's quite another to try stop them from growing the best crop available to them. Can we call a moratorium on environmental moratoria, to be enforced by the feds? Certainly, all those environmentalist are eating food, pissing and shitting and producing CO2. Maybe they should quit.

Wombat-socho has the big list, "Rule 5 Sunday: Proudly Encouraging The Male Gaze Since 2009" up at The Other McCain.
Posted by Fritz at 7:49 PM