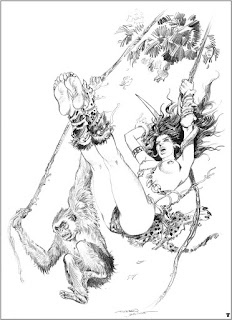 Chimpanzees and monkeys have entered the Stone Age


Boesch and his colleagues had previously studied modern chimpanzee stone tool culture in the region. This research revealed that the chimpanzees have an idiosyncratic way of choosing and using their tools.

For instance, chimpanzees will often deliberately opt for particularly large and heavy stone hammers, between 1kg and 9kg, while humans prefer to use stones that weigh 1kg or less. Many of the 4300-year-old stone tools weighed more than 1kg, suggesting they were used by chimpanzees.

Chimpanzees also use their stone tools to crack open certain types of nuts that humans don't eat. Starch residues on some of the ancient tools came from these nuts.

Together, these findings led to an obvious conclusion: chimpanzees have been using stone tools in the rainforests of Ivory Coast for at least 4300 years.