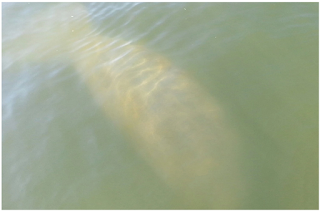 or the Polar Bears of Churchhill, Manitoba, a Manatee arrives in Maryland for its annual visit: Manatee spotted in tributary off Chesapeake Bay near Waldorf, Md.

Officials with the National Aquarium said in a blog they run that the manatee was seen in St. George Creek in the Waldorf area.

It actually isn’t that odd to see manatees in the area. Manatees usually travel from Florida up the East Coast, the aquarium said. Sea grass — their main choice for food — is abundant in the Chesapeake Bay.

And like others who seek warmer temperatures when it starts to get chilly in the D.C. area, the manatees “will begin to head back to the warmer waters” along the southern Atlantic coast, authorities said.

It seems like every year, a Manatee or two infected with wanderlust find themselves up the Bay during summer. Two years or so ago Back in 2011 (time flies, doesn't it), one stopped by our local harbor, and looked in vain for something edible for a while before leaving. Most years they seem to leave on the their own, but if I recall correctly, one had to be airlifted out of New England, and one showed up dead in the Patuxent River a few years back.

When Manatees Attack
Posted by Fritz at 2:55 PM