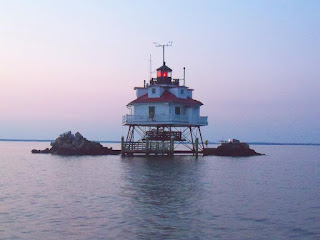 Another long day on the water commercial fishing with Walleye Pete.

Before sunrise at Thomas Point Shoal lighthouse this morning. It was slow there in the morning, but better in the afternoon 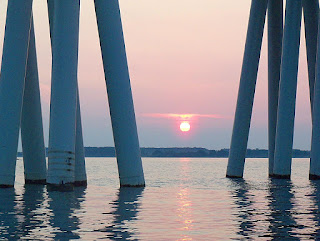 Sunrise from between legs of the Chesapeake Bay Bridge. 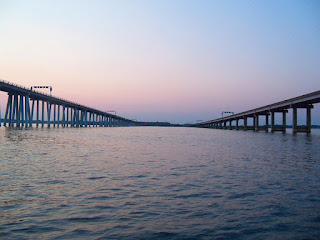 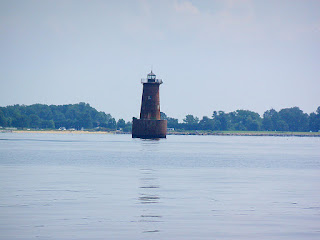 After a long, and only somewhat fruitful diversion into the bay above the bridge (We caught a few fish, and I caught the largest of the day, a 30 inch, 8 lb slim summer striper) we ended up well south.

This is Bloody Point Bar lighthouse, near the south end of Kent Island across from Annapolis. 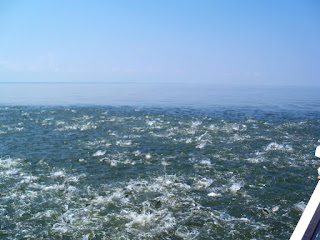 We finally found the acres of breaking fish we were hoping for near the south end of Poplar Island, the island being rebuilt with dredge spoils from Baltimore Harbor. This churning water marks a huge school of Striped Bass eating small Bay Anchovy (which they would spit up when caught). There were many such schools in the area. 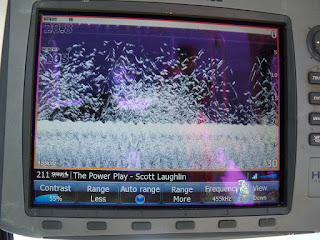 This is what a thick school of Stripers looks like on Pete's depthfinder. Most of these fish were undersized, even below the 18 inch limit that commercial fisherman are allowed to keep, but about one in five were above the legal limit. 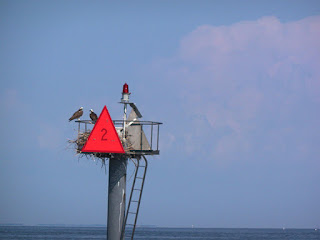 A pair of Ospreys on their nest on the channel marker on the way back into Deale this afternoon.

We ended up with 38 legal fish. Not an awesome day, but one that paid Pete's bills and then some.
Posted by Fritz at 7:42 PM