Rather Would Rather Misremember Rathergate

By way of Wombat-socho's "In the Mail, 07.21.15" from Megan (how can one person be so productive) McArdle: Remember 'Memogate'? Makers of a Dan Rather Film Don't

Looking for "The truth behind Dan Rather’s exit from CBS"?

That's the headline for yesterday's Page Six, because there's a new movie coming out about Dan Rather's precipitous departure from the network 10 years ago. Naturally, Cindy Adams dishes some details.

But we'll get to the column in a minute. What's more interesting is, well, the truth behind Dan Rather's exit from CBS. He and his producer and several other people were dropped because they screwed up.

In the run-up to the 2004 election, they went on air with a blockbuster story about George W. Bush having gone AWOL during his service in the Air National Guard. The documents that backed this story up were probably forgeries.

Now, I say "probably," because I can't exclude the very remote possibility that in the early 1970s Bush's commanding officer, for reasons lost to history, decided to type up these memos himself (even though his wife said he couldn't type) rather than getting his secretary to do it. 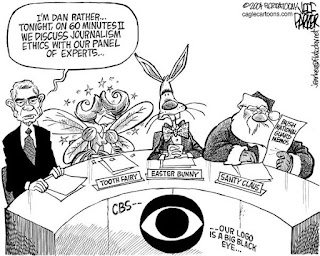 I can't prove that he never got his hands on a rather exotic typewriter instead of using the ones that were in his office, spent some time working on it with a soldering gun, and managed to coincidentally produce a document that looked exactly like what you would get if you opened up Microsoft Word 2003 and started typing.

I can't rule out the possibility that he, for reasons known only to himself, wrote these documents using Army jargon in several places rather than the terms that would have been used in the Air National Guard. 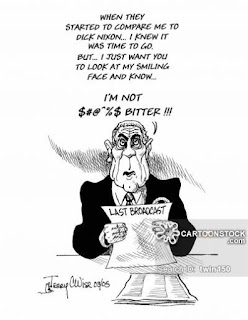 I can't rule out the possibility that these documents somehow escaped from his office, roamed around in the wild for several decades, and eventually ended up in the possession of a retired lieutenant colonel in the Army National Guard, who had an ax to grind against both the National Guard and one George W. Bush.

I also can't rule out the possibility that somewhere in this vast universe of ours, there is a planet composed entirely of marshmallow, where the rivers run with honey. . .

As they say, read the rest.

Rathergate, or memogate as some called it, was a signal event in my political evolution. While I knew the that the media was strongly biased against conservatives and conservatism. What Rathergate made perfectly clear was that some large media players were willing to lie and cheat to try to discredit a Republican candidate for President, and the vast majority of the media went along with them and refused to cover it, gave the perpetrators aid and comfort when possible, and only yielded reluctantly when the evidence against them could not be overlooked any longer. It was at that point I began to follow some of the blogs I still follow, Instapundit, The Ace of Spades, and Allahpundit (now at HotAir) as a rapid source of news outside the MSM.

In the course of writing this, I wanted to find some of the old "Rathergate" cartoons I had collected (but apparently deleted). If what I can find on Google is any indication, a lot of this history has been forgotten. I'm not surprised that Rather and the liberal media are going to try and replace history with one that is more favorable to them.