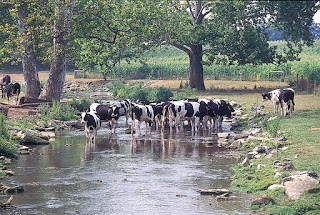 A lawsuit aimed at keeping cattle out of Virginia streams that feed into the Chesapeake Bay has been rejected by a Circuit Court judge in Richmond.

The Chesapeake Bay Foundation said Tuesday it will review the decision before deciding on its next step.

The foundation sued the state to push for regulations that would require Virginia's largest livestock operations to fence off streams to keep their animals out of the water.

The foundation has been leading the decades-long fight to restore the bay, and it argued that the fouling of waterways that feed the bay slows its cleanup. Animal waste and soil erosion are two contributing factors to the bay's pollution.

My guess is that they'll turn around and sue the EPA for failure to enforce a law that's not really spelled out, and the EPA will settle without much fight, since it does nothing but enlarge their authority. Sue and settle is an old dance for CBF and EPA.

Such regulations make cattle much more expensive, by requiring farmers to keep cattle out of streams where they go to drink, and requiring more equipment to keep them watered.

And yes, I have seen cattle in the water on the Chesapeake Bay.
Posted by Fritz at 7:12 PM