Though it seems Delaware may get the credit: Manatee Spotted in Chesapeake and Delaware Canal 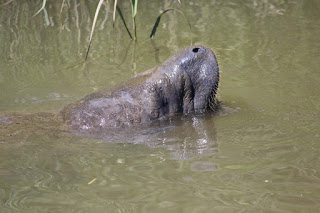 Delaware wildlife officials are warning boaters to keep a lookout for a manatee that was spotted in the Chesapeake and Delaware Canal.

Cpl. John McDerby of the Division of Fish and Wildlife Natural Resources Police says a 7-foot manatee was spotted at the Summit North Marina in Bear on Thursday afternoon.

McDerby says it's rare for the creature, a native of Florida, to travel this far north.
McDerby says boaters who spot a manatee should slow down their vessel and keep a safe distance away from the manatee.

Earlier this month a manatee was spotted near Ocean City, Md., and in the Chesapeake Bay. Officials say they are not sure if each sighting is of the same manatee, or if there are several of them in the area.

We recently saw that one was spotted in the lower Potomac River. I doubt they are the same individual, as that would be a quick swim at the usual speed of Manatee

I wonder if they would take a fly designed to look like sea grass. That would be a hell of a fight.
Posted by Fritz at 3:04 PM