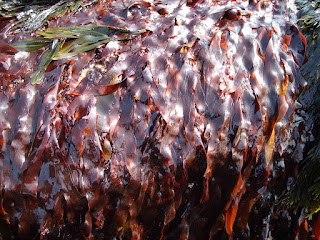 Hail to thee, my Alma Mater: There’s a New Seaweed That Tastes Like Bacon and Is Better for You Than Kale


Researchers from Oregon State University’s Hatfield Marine Science Center say they’ve created and patented a new type of seaweed that has the potential to be sold commercially as the next big superfood.

The reason? It tastes just like bacon, they claim.

The bizarre but tasty creation is actually a new strain of red marine algae called dulse that is packed full of minerals and protein and looks like red lettuce.

If red lettuce were allowed to become completely


Dulse normally grows in the wild along the Pacific and Atlantic coastlines and is harvested, dried and sold as a cooking ingredient or nutritional supplement.

“Dulse is a superfood, with twice the nutritional value of kale,” said Chuck Toombs, a faculty member in OSU’s College of Business and a member of the team working to develop the product into a foodstuff. “And OSU had developed this variety that can be farmed, with the potential for a new industry for Oregon.”

Dulse has been collected, and sometimes even cultivated as food for a long time in the Northern European countries, so this is not a real breakthrough in feeding the world from the sea.

It would seem to me that the area suitable for growing dulse, even bacon-flavor dulse, (mostly clean water coast lines) would be far more limiting that the area available for crops that pigs eat. Don't expect dulse to replace bacon soon.

However, you might see it start to show up in specialty sections soon.
Posted by Fritz at 8:52 AM