Credible reports of snakehead sightings and results from a Maryland Department of Natural Resources and U.S. Fish & Wildlife Service survey indicate that the non-native snakehead species has spread into the C&O Canal and thereby the Upper Potomac River.

Last fall, anglers reported catching two northern snakeheads between mile marker 19 and 22 in the C&O Canal. Following the reports, biologists from the agencies surveyed about eight miles of the canal between Great Falls and Violettes Lock, and found a seven-inch juvenile snakehead. Subsequently, a park visitor photographed an adult northern snakehead guarding a school of fry in the same section of canal.

These discoveries validate concerns that this non-native species could gain a foothold in the non-tidal Potomac River above Great Falls, a site where it had never before been reported. 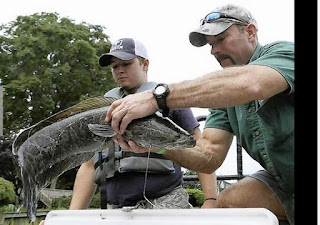 First discovered in the tidal Potomac River watershed in 2002, the northern snakehead fish is now firmly established in the Patuxent River, and has spread to other fresh and low-salinity tidal waters in Maryland and Virginia.

There are many sources of water exchange between the canal and the Potomac, particularly during flood events, and it is nearly certain that the species has now gained access to the Upper Potomac River.

“Eradication is not possible once these fish become established in an open river system such as the Potomac,” said DNR inland fisheries biologist John Mullican. “We expect that these fish will eventually become a permanent part of the Upper Potomac fish community. Confronting snakeheads in the canal system is the best way to mitigate their emigration into the Upper Potomac.”

When I saw the headline, I thought maybe birds (like an Ospreys) had carried enough Snakeheads above the falls and dropped them (we once had a live Mud Shad dropped near our building at work, a half mile from the water). But I had forgotten that the C&O canal, despite having worked on it. That's a perfect vector for the Snakehead, providing the nice slow water that it likes to live in, and a continuous route for interchange, especially at high flow.

Basically, I think we can assume that sooner or later the Snakehead will find it's way to all suitable habitats east of the Western Continental Divide. We might as well learn to fish for them and eat them.
Posted by Fritz at 6:01 PM