I picked on Florida a minute ago, so it's only just I take my own state to task: 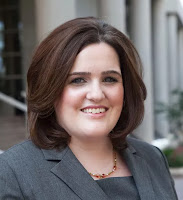 
A 39-year-old state lawmaker from Bethesda was arrested in late June and charged with indecent exposure and trespassing after a dispute at the home of her ex-husband, according to court records.

A charging document said Del. Ariana B. Kelly (D-Mongtomery) was dropping off her children at her ex-husband’s house, in the 5300 block of Alta Vista Road in Bethesda, when she became upset that his fiancee was inside the residence. Kelly and Barak Sanford were divorced in November, according to court records.

Sanford told police that Kelly started ringing the doorbell and banging on the door and that he asked her to leave.

According to the charging document, Sanford played a cellphone video for police that showed Kelly ringing the doorbell “numerous times,” exposing her breasts in the direction of Sanford’s cellphone camera and then “with one breast in each hand [shaking] them up and down.”

An officer who responded to the scene told Kelly that she could be arrested for indecent exposure and asked her to leave. According to the document, Kelly said: “Arrest me then,” and she extended her wrists toward the officer.

Unfortunately, her husband had enough class not to release the video to the press, but you can get the idea here, from Page 3 star Joey Fisher:

Wombat-socho has "Rule 5 Sunday: Insert Clever Title Here" up at The Other McCain.
Posted by Fritz at 6:01 AM