Its the silly season in Chesapeake Bay, as Virginia and Maryland fight over the crabs. First, Virginia Governor Terry McCauliff claimed that all crabs originate in Virginia: 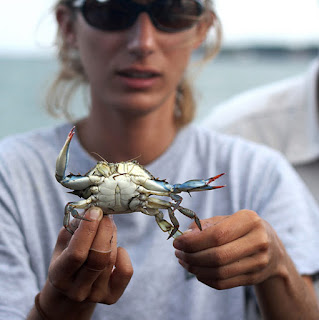 Terry McAuliffe says all Maryland crabs are born in Virginia

"You know, Maryland talks about its crabs," McAuliffe said with a chuckle during a July 21 radio interview. "If anyone from Maryland is listening, I want to make this perfectly clear: All the crabs are born here in Virginia and they end up, because of the current, being taken (to Maryland). So really, they should be Virginia crabs." . . .

Briefly, the majority of crabs are released as zooea in Virginia waters, after the fertilized female crabs migrate down to the high salinity water near the mouth of the Bay. They spend a while in the ocean, then migrate back into the Bay and disperse into its nooks and crannies. A minority of crabs may be born from crabs in Maryland's Coastal Bays or other states, so it is absolutely false to use the word "all".

So really, Virginia plays a short but important role in the developement of the Maryland crab fishery, serving as a birthing center. As far as I know, having been born in a particular hospital doesn't make one the property of that hospital. 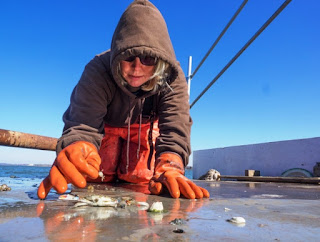 Virginia's role in this has long been a net negative, with it's winter dredge fishery, in which the pregnant females, most of which recently migrated from Maryland resting in the sediment prior to releasing their young, are dredged out of the sediment, and turned into "she-crab soup" (among other things), a practice they have temporarily halted until crab populations recover.

Maryland's response was in the form of letter from Mama Crab.

Maryland crabs at heart: A mother's response to a vicious allegation by the governor of Virginia

As Chesapeake Bay blue crabs, I know all of you have developed a pretty hard shell over the months. It's the nature of who we are as Callinectes sapidus. But you may have heard something recently that you might find upsetting. That's why I'm taking pen in claw to write to you now, which, as you can guess, is not the easiest thing for a crab to do.

Earlier this month, a human being named Terry McAuliffe went on a radio show and suggested that there's no such thing as a "Maryland crab" since all Chesapeake Bay crabs are born in Virginia waters. Personally, I find this offensive, as I'm sure you do, too. We've always identified ourselves as denizens of Maryland. It's where your father and I met and had a wonderful rapturous experience in the marsh grass in the Miles River near St. Michaels on a glorious day last summer. (Where he is now I couldn't say, but I understand he's regarded as a Number 1 — as he still is in my book).

It would be tempting to ignore the ramblings of this McAuliffe fellow, but it turns out he was elected governor of Virginia even though he was born in Syracuse, N.Y. Why this doesn't make him a "New York governor" is a mystery that only a flabby, shell-less organism can explain. I strongly suspect that this 58-year-old politician wouldn't understand the life cycle of our species if we pinched him in the butt, which I'm sorely tempted to try. . .

Seriously, the Blue Crab fishery in the Chesapeake Bay is a product of both states, and both states need to cooperate in managing the fishery.
Posted by Fritz at 5:00 AM