Mankind, by way of NASA, just completed a flyby of the planet Pluto (let's go ahead and grant it full planet status, instead of the "minor" planet status it was recently). After travelling 9.5 years, and about 3 billion miles, the unmanned spacecraft New Horizon flew past the planet at a distance of 476,000 miles, and sent back this photo: 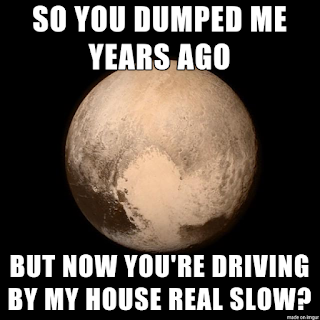 Scientists who had waited on pins and needles for the duration of the flight were as ecstatic as scientists get:


After nearly 15 years of planning, building, and flying the New Horizons spacecraft across the solar system, we’ve reached our goal,” said project manager Glen Fountain at APL “The bounty of what we’ve collected is about to unfold.”

So go have a drink, and let loose a little! Wear a funny colored shirt or something.

And what do these pictures tell them?


The newest photo of Pluto, obtained by New Horizons on Monday and made public Tuesday morning, shows a mottled 4.6 billion-year-old world with a strikingly bright heart-shaped region and numerous craters. Stern said there are indications of tectonic activity — perhaps even recently. Asked if the images show that there’s snow on Pluto, Stern said, “It sure looks that way.”

But is the snow water ice, methane ice, ammonia ice, or even frozen nitrogen ice?


Project scientist Hal Weaver said there is a small bright spot that might be the tip of a mountain covered with snow. He said it looks “almost like a lighthouse.”

“It looks like there are these great mounds — like the mounds with almonds on top,” Weaver said.

So, maybe a lighthouse, used to guide interstellar travel, or a giant ice cream, with covered with almonds.


Linear features on the surface “could be scarps, or faults,” said New Horizons team member and planetary scientist Cathy Olkin.

Planetary scientist David Grinspoon, who is not part of the team but arrived for the flyby celebration Tuesday, said of Pluto, “I see a range of surface ages and no surface that looks really ancient. And that tells me that I’m looking at an active world.”

I remember when Pluto could be used in fiction as a source for aliens.
Posted by Fritz at 2:59 PM