Honeybees - Not Yet Dead

Another wannabe environmental disaster which failed to live up to its hype: Call off the bee-pocalypse: U.S. honeybee colonies hit a 20-year high

The situation has become so dire that earlier this year the White House put forth the first National Strategy to Promote the Health of Honey Bees and Other Pollinators, a 64-page policy framework for saving the nation's bees, butterflies and other pollinating animals.

The trouble all began in 2006 or so, when beekeepers first began noticing mysterious die-offs. It was soon christened "colony collapse disorder," and has been responsible for the loss of 20 to 40 percent of managed honeybee colonies each winter over the past decade.

The math says that if you lose 30 percent of your bee colonies every year for a few years, you rapidly end up with close to 0 colonies left. But get a load of this data on the number of active bee colonies in the U.S. since 1987. Pay particular attention to the period after 2006, when CCD was first documented. 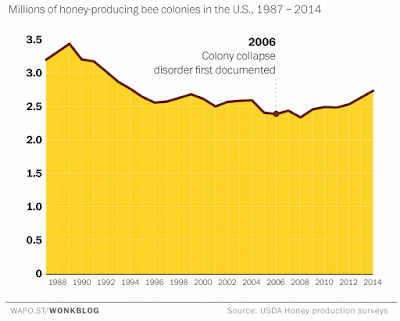 So what happened to the beetastrophe?

A 2012 working paper by Randal R. Tucker and Walter N. Thurman, a pair of agricultural economists, explains that seasonal die-offs have always been a part of beekeeping: they report that before CCD, American beekeepers would typically lose 14 percent of their colonies a year, on average.

So beekeepers have devised two main ways to replenish their stock. The first method involves splitting one healthy colony into two separate colonies: put half the bees into a new beehive, order them a new queen online (retail price: $25 or so), and voila: two healthy hives.

The other method involves simply buying a bunch of bees to replace the ones you lost. You can buy 3 pounds of "packaged" bees, plus a queen, for about $100 or so.

Will the people who have been agitating against Monsanto for their role in making pesticides and GMO organisms as causes for the beecapolypse be mollified? I doubt it.

Incidentally, Honeybees are not native to the Western Hemisphere, and if we didn't like them (and their honey) they would be considered an invasive species for the way they've pushed aside so many of the native bee species that act as pollinators.

For the last several years here, I have indeed noticed an almost complete absence of Honeybees. However, our flowers are visited by a steady stream of a wide variety of native bees, wasps, and butterflies.
Posted by Fritz at 4:15 PM