Ashes Ashes, All Fall Down

Maryland's Ash Trees At The Mercy Of Invasive Asian Beetle 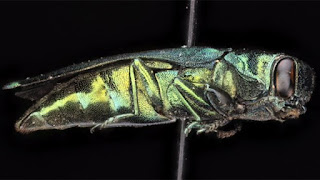 The seemingly inevitable spread of the Emerald Ash Borer continues.

The wood-chewing beetle — a native of Asia — was first discovered in the U.S. in 2002 and has now spread across the Midwest and the Northeast. It’s been attacking Maryland’s ash trees since 2003.
This summer, the bug has been discovered in four more counties, including — for the first time — two counties on Maryland’s Eastern Shore.

State inspectors first found the bug on that side of the Bay in a trap on Kent Island.

Pheromones on the trap attract bugs, and antifreeze in a collection cup kills and preserves them so surveyors like Steve Bell can see what’s been buzzing and crawling around the Ash trees.

A mature Emerald Ash Borer looks a little like a firefly that’s been spray-painted green and then dusted with gold powder.

Adults chew on leaves, but it’s the larvae that do the most damage: they chew a maze of destruction under the bark of a tree, a process that can kill an Ash in a few years.

As part of the program to  control the beetle, the state recommends, and in some cases even commands restrictions on the sale and transport of firewood. However, unless some better means of fighting them is found, it is basically a matter of time until they reach everywhere in North America where Ash trees grow.


“Generally speaking – I’d have to err on the side of pessimism,” Bell says, “just because of the amount of dead trees I see and how rapidly it occurs.”

Bell says there’s some promise in the development of parasitic wasps that have been introduced in some areas in Maryland. The wasps are natural enemies of the Emerald Ash Borer in Asia, and use the beetle’s larvae as food for their own young. But it will likely be years before the wasps are numerous enough to make a real dent in the Ash borer population.

The next step in the fight is a simple one: the entire state of Maryland is likely to fall under the federal Ash quarantine. It bans the movement of Ash products outside of the quarantine area, which now covers all or part of 25 states.