A press release clearly went out from the USGS regarding a study of sea level rise in the Washington DC area.  Here's how the Washington Post has it:

Why sea level in the D.C. region is rising faster than anywhere else on the East Coast


Sea level in the Washington, D.C., region is rising fast — faster than any other region along the East Coast. Scientists have now confirmed that this is because, in addition to global warming pushing water levels higher and higher, the ground is literally sinking beneath our feet, and it will probably drop another six inches by the end of the century.

Even without the sinking action, sea level would still be rising because of global warming — melting glaciers (Alaska, Greenland, the West Antarctic ice sheet, to name a few), and thermal expansion (when water warms, it expands). Looking at climate change influences alone, average global sea level is likely to rise anywhere from one foot to to 2.5 feet by 2100.

Combine the two effects — sinking and climate change — and the Chesapeake Bay’s sea level rise could surpass three feet by the end of the century. Of course, that is assuming the absence of a catastrophic melting event in Greenland or Antarctica.

Left unsaid is that without the assumed acceleration from global warming, the rate will continue at about a foot per century, and that acceleration is not evident in the data to date: 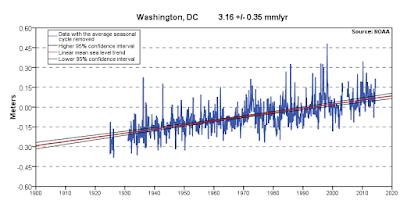 Look at that rate 3.16 mm per year since the early 1900, with no evidence for acceleration. That is 12.4 inches per century (the low value they cite, which suggests they can't rule out the "no change" option).

They also added this amusing verbal image of the isostatic rebound effect:


. . . the “sinking” at hand is a remnant of the last ice age when a vast sheet of ice covered much of North America, as far south as the Ohio Valley and New York City. That glacier was heavy, causing the ground to sink beneath its weight. As a result, the areas bordering the ice — like Washington, D.C. — bulged upward. “It’s a bit like sitting on one side of a water bed filled with very thick honey,” lead author Ben DeJong explains.

In the thousands of years since the massive glacier retreated, the areas that were under ice have risen and the bulge has sank.

I don't really see the news here. I was taught about isostatic rebound and it's effects on sea level back as an undergraduate, sometime around 1972. Perhaps they added a decimal and some error bars to estimates of its rate, but that wouldn't ordinarily be cause for a big stir.

But they were relatively restrained compared to Huffington Post: Washington Is Finally Getting What It Deserves As It Sinks Into The Sea


Meanwhile, Congress has thus far failed to do anything to address climate change, instead spending its time trying to undo the actions the Obama administration's Environmental Protection Agency has taken to address planet-warming emissions. And the majority of candidates for the 2016 Republican nomination maintain that human activity isn't causing climate change and that people who say it is are "alarmists."

"It's ironic that the nation's capital -- the place least responsive to the dangers of climate change -- is sitting in one of the worst spots it could be in terms of this land subsidence," University of Vermont geologist Paul Bierman said in a statement accompanying the research. "Will the Congress just sit there with their feet getting ever wetter? What’s next, forebulge denial?"

I have news for Kate Sheppard and Paul Bierman. If Republicans thought that global climate change would drown Washington D.C. a few years earlier, many of us would be even more excited about the future. I think we should move the nations capitol closer to the geographic center of the country. How about Fargo, North Dakota?
Posted by Fritz at 6:44 PM