Naval Academy at the Cross Roads


The U.S. Naval Academy is racing to erect flood walls, berms and other bulwarks against tidal flooding and severe storms, its superintendent told House Democrats at a field hearing July 17.

But, of course, so far, there has been no increase in sea level rise with global warming climate change since records have been kept . . . 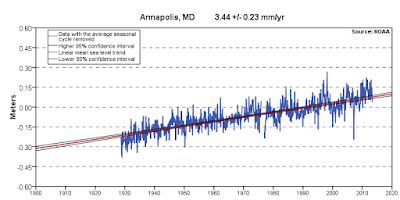 just the slow, relentless rise from the end of the last ice age.


The hearing of the House Energy and Commerce Committee was held by Rep. Frank Pallone (D-N.J.)., the committee's ranking member, one day after the National Oceanic and Atmospheric Administration released a report tracking rising global temperatures on land and in the oceans.

Carter testified that the campus has integrated flood walls into construction of major new projects, partly to protect existing buildings, most of which are more than 100 years old, including a chapel that opened in 1908 and nearby housing for midshipmen at the service academy, located in Annapolis where the field hearing was held.

Projecting that line back, there has been, indeed, about 1 foot of sea level rise since that chapel was built. And yes, eventually, if nothing is done, the Bay will eventually claim all the land at the Academy.


The academy has spent $120 million since 2003 when Hurricane Isabel struck the academy to ensure that its buildings and other infrastructure “can handle rising waters and major events,” Carter said at hearing.

If it's going to cost that much, maybe they should consider moving to a better location. Cutting carbon ain't gonna do it. Or they could do like the Dutch, and just build dikes.


But not all of the older buildings at the academy, which dates to 1845, can be protected indefinitely, Carter said. “We're the Navy, we operate and live at sea level,” the superintendent said, before noting the 338-acre property for the academy was reclaimed from a local creek.

The academy has thus “designated buildings and fields [that will be] allowed to be flooded once in 100 years,” he said, where changes “to keep them dry would not be cost-effective.”

So moving to Denver is out of the question?