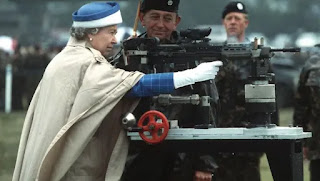 Anybody who sees, hears, or feels (can't leave out the blind brail users can we?) knows that yesterday Queen Elizabeth the second died, leaving the fate of the Monarchy to her son, the new King Charles the whatever. I don't have a lot to say except that, in Elizabeth, the English got far better than they deserved. She was good enough to make the monarchy seem appealing.


As we expected, the DOJ has filed an appeal to Judge Aileen Cannon's ruling allowing a so called 'special master' to decide which items taken in the Mar-a-Lago panty raid we properly taken and which were protected by legal and executive privileges. WaPoo whines that the Justice Dept. seeks to regain access to classified Mar-a-Lago documents, "As they noted their plans to appeal, prosecutors said they must be able to access classified documents to determine if there are more to be found"  Herr Professor Jacobsen at LI, Mar-a-Lago Raid: Feds Ask Judge To Partially Stay Special Master Order, Will Appeal If Don’t Get Their Way  "“the government seeks a stay to the extent the Order (1) enjoins the further review and use for criminal investigative purposes of records bearing classification markings … and (2) requires the government to disclose those classified records to a special master for review.”"

The feds continued to leak like crazy after the order, in a form of lashing out, getting the word out to The Washington Post that some of the documents related to a foreign government’s nuclear program (the leak didn’t say that such documents were classified). For years during Russia Collusion attacks, whenever there was a news cycle that might help Trump in the public eye, the feds leak something to grab back the news cycle; that tactic seems to be renewing itself.

Regardless, the feds were not happy with the result, and filed a Motion for a Partial Stay Pending Appeal with Judge Cannon. Procedurally, they have to ask the District Court for a stay before seeking a stay in the appeals court. That certainly will happen if Judge Cannon turns them down.

At PM, Biden admin appeals judge's order of special master for seized Mar-a-Lago docs. Sundance at CTH, Justice Dept Appeals Order to Appoint Special Master, Threatens Judge to Shop for Friendly Court, Demands No Party Outside DOJ Should Have Right to See or Review Their Identified Classified Documents They really don't want anyone, however qualified, to see what those documents really contain. It's almost like they might contain evidence of wrong doing by higher ups in the DOJ and FBI. Via the Wombat's In The Mailbox: 09.08.22 (Afternoon Edition) the Weasel Zippers remind us Biden Claimed He Knew Nothing About Raid On Trump Home – But Search Warrant Shows He Set Events Into Motion That Led To It.


Matt Vespa at Town Hall thinks It Sure Seems the Biden DOJ Is Leaking Fake News Stories to the Liberal Media.  Mike Davis @mrddmia, "Dear America: Here’s Biden’s “criminal” (political) case against Trump, through November 8th: - Leak. - Clutch pearls. - Leak. - Clutch pearls. - Leak. - Clutch pearls." Responding to Bill Barr's statement that Trump had no business carrying off "secret" documents to Mar-a-Lago, Margo Cleveland ask Has The Trump Raid Made Bill Barr Forget All About Deep-State Deceit? Do not trust the DOJ or FBI when it comes to telling the truth about Trump; they have lost all credibility. At ET, Trump: FBI Photos of ‘Top Secret’ Documents Were a ‘Set Up’. It's obvious that the photo was staged. If the documents were "scattered", why are they all in the same orientation?
Cutie Pavlich at Town Hall claims Hillary Clinton Lies About Her Mishandling of Classified Information. I can shave six words off that headline. At NYPo, Jonathon Turley opines Hillary Clinton plays the victim — but her history of avoiding criminal charges shows she’s anything but. At Town Hall, Sister Toldja offers Prayers for Jonathan Turley After His Definitive Takedown of Hillary’s Latest ‘but My Emails’ Defense. Turley didn't (and won't) kill himself.
At WaPoo, Prosecutors seek details from Trump’s PAC in expanding Jan. 6 probe, "Investigators are seeking documents about Trump’s political fundraising in the wake of his false claims about the 2020 election." Pure legal harassment.
Stacey Lennox at PJ Media finds Support for Impeaching President Biden Is Growing Ahead of the Midterms. At WaEx, Paul Bedard Most want Biden impeached, see GOP dropping ball

In a new Rasmussen Reports survey, voters by a margin of 52%-42% support impeachment. That includes 77% of Republicans, 50% of independents, and 32% of Democrats. But in a related question about Republican promises to make good on impeachment threats, expectations for action are down on the chances the GOP will follow through. Rasmussen found that 47% believe it is likely that the Republicans in the House will vote to impeach versus 43% that don’t. A third of Republicans said it was unlikely that the GOP would vote to impeach.

At WaT, Bannon charged with money laundering in wall-building scheme. At HE, After Indictment, Bannon Warns 'They Are Coming After All of Us'. Now do BLM.

At News Busters, Politico Reports White House Anger at CNN Over Negative Coverage of Biden's 'Red' Speech. It's not nice to make fun of the senile. At Twitchy, Rasmussen teases bad news for Biden and Dems on how the ‘Red Sermon’ was received by Independents and swing voters. At Spin Strangeness and Charm, Looking around: Biden’s “blood red” speech polls very poorly among independents. “Joe Biden used to be a sharp evil man — now he’s become a dimwitted evil man.” At Haut Hair, Winter is Coming (on Monday): Just how badly did the Red Sermon flop?
From the Wombat's In The Mailbox: 09.08.22 (Evening Edition) the Weasel Zippers: Occasional Cortex Cries: America Hates Women And I’ll Never Be President, Poll: Majority Of CNN, MSNBC Viewers Say “Disinformation” Causing Hispanics To Vote Republican, Poll: Voters Overwhelmingly Want Biden Impeached, and Peter Navarro Blames Trump’s Cabinet For Why He Lost In 2020 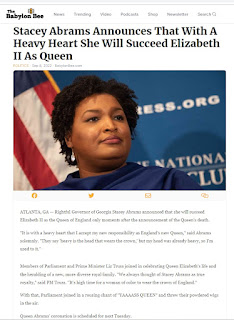 J. Bob Smith at Am Think thinks if you Want to Win the Midterms? Listen to Ron DeSantis. KT at Haut Hair sees Obama hit the campaign trail for nervous Democrats. At WaEx, McCarthy to unveil 'Commitment to America' policy agenda ahead of midterm elections. They weren't committed before now? Parkersburg Sentinel, Manchin under water in new WMOV/Triton poll. Capt. Ed at Haut Hair finds it Too fun (and early) to check: Manchin at 32% for 2024 re-election bid?. He's done a lot to piss off WVa, as well as everybody else. From the Wombat's In The Mailbox: 09.08.22 (Afternoon Edition) Legal Insurrection: Unhinged ‘Comedian’ Kathy Griffin Says Vote for Democrats in November or Expect Civil War. The new guy at Haut Hair Beege Welborn (is this AllahPundit's replacement?) says Herschel Walker's new ad is like a cooling sip of water "And, HEY! BY THE WAY (this is where Walker sticks the shiv in and TWISTS), America’s a pretty great place. Man. Divisive. I understand the caterwauling."
At Breitbart, Democrat John Fetterman Cracks Under Pressure, Agrees to Debate Republican Mehmet Oz, eventually. "“It was just simply only ever been about addressing some of the lingering issues of the stroke, the auditory processing, and we’re going to be able to work that out,” he said."  Ace, Fetterman: I'll Do One Debate. Maybe. Someday. Update: Tucker Carlson's Ten Minute Biography on Fetterman Added. Oofdah! Capt. Ed, Senate Dems to Fetterman: Keep hiding!  "Terrible advice in terms of good governance. In terms of political strategy, however, Senate Democrats’ reaction to criticisms of John Fetterman may strike a balance between wisdom and necessity."  From the Wombat's In The Mailbox: 09.08.22 (Afternoon Edition) the Victory Girls see Fetterman Campaign Has Lots Of Problems.
Sundance at CTH, Arizona Governor Candidate Kari Lake Responds to a Question About Being Donald Trump’s Running Mate. Nope. But takes a nice swipe at the media. At the Center Square, State officials deny Hobbs’ request for town hall format to escape debate with Lake. "Arizona’s election debate authority will not bend to Democratic Secretary of State Katie Hobbs’ demand to have a sequestered conversation with a moderator in lieu of a traditional debate with Republican Kari Lake. " Fear. At WaT, Unqualified Nevada candidate will stay on ballot, judge rules, to drain Republican votes. The AP reports SC Democrats call on their party’s US Senate nominee to quit, "Sitting in a restaurant, Matthews, who is Black, is heard saying that she represents a “mostly white” district, adding, of white voters: “I keep them right here — like under my thumbs. ... Otherwise, they get out of control — like kids.” “You ought to know who you’re dealing with,” Matthews goes on to say. “You’ve got to treat them like s—-. That’s the only way they’ll respect you.”
At JTN, Ex-Virginia election official charged with corruption related to 2020 election. "Ex-Prince William County voter registrar Michele White is charged with two felony counts alleging corrupt conduct as an election official and making a false statement, and one misdemeanor charge of willful neglect of duty by an elected official, Miyares said." At Da Fed, John Lott and Steve Smith  To Restore Americans’ Faith In Elections, Fix Sloppy Record-Keeping. "If we can enforce the Civil Rights Act of 1960’s data retention requirements, we will be able to help restore confidence in our elections." At CNS News, Sen. Johnson: FBI 'Interfered in the 2020 Election'

He continued, "Now, the other thing that happened interestingly in August -- on August 6, 2020, this is when Senator Grassley and I both got unsolicited [FBI] briefings that were later -- that were later leaked to The Washington Post for the purpose of smearing me. So I would argue the FBI has not only interfered in the 2020 election, they've interfered in this Wisconsin U.S. Senate election by smearing me through that leak to The Washington Post.

Matt Vespa at Town Hall shows a Twitter Thread that Points Out What's Missing in the Story About the Elected Dem Accused of Murdering Journalist. That he's a Democrat? This morning's  WaPoo managed to put off mentioning it until the 6th paragraph, Official’s DNA linked to Las Vegas reporter’s stabbing, police say

At PJ Media Stacey Lennox warns Brace Yourself: Food Shortages Will Be a Reality in the West This Winter. Not the diet plan I had in mind. Thanks, Brandon!

Shawn Fleetwood at Da Fed reports a Court says Fauci, Biden Officials Must Cough Up Records Of Collusion With Big Tech To Shush Dissenters. Stephen Kruiser at PJ Media thinks Anthony Fauci May Not Be the Devil, but He's Not a Good Guy I still remember when Fauci's, vaccine stopped AIDS, don't you?