An Irish woman has been crowned the world axe-throwing champion after winning a competition in Canada.

Ceola McGowan, from County Sligo, saw off competitors from across the world to win the World Double Bit Axe Throwing Championships on Sunday.

She said she hoped her win would inspire more women to get involved in the sport. 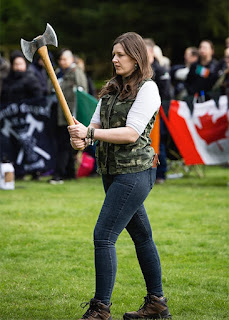 The 31-year-old was introduced to axe throwing by a friend while at university.

She told BBC News NI her target had been to win the title by the age of 35.

Speaking about her first experience of the sport, she said: "I ran home and put on as much plaid [clothing] that I had and big wellies because all I knew I was heading out to this big barn in the Wicklow mountains to meet these bearded axe throwers."

After her first throw of the axe, Ms McGowan said she was "immediately hooked" and took up the sport competitively just five months later.

That's no woman to trifle with.