Sorry about the lack of posts yesterday, but my occasional day job came to an annual peak yesterday and sucked up most of my time. I'll try to do better.

A bit of a political potpourri today, as the situation in England (yes, the Queen is still dead) has dominated the discourse. At PJ Media, Matt Margolis expresses hope that If This Is True, Democrats Are in Real Trouble for Years to Come. Rasmussen Reports@Rasmussen_Poll, "Democrats only have a 24% lead in the Generic Ballot among black voters. https://bit.ly/3L2VBID" Sundance at CTH, Tucker Carlson Outlines Reasons Latino Community Aligns with Trump and MAGA Movement

Chris Datoc at WaEx, Biden tones down 'MAGA Republican' attacks in Ohio's 'Silicon Heartland', because, well the Republicans are likely to win Ohio. At the Stream, The Left Hires its Zealots. It Has the Right Idea, "Half of politics is doing a victory dance on top of your enemies. That's what wins you new friends." Speaking of zealots, from Twitchy, Rep. Eric Swalwell’s ‘unity’ tweet ages wonderfully next to his reminder that ‘there are more of US than there are of them.’
At News Busters, Karine Jean-Pierre Easily Tagged As An 'Election Denier'. At Fox, Democratic candidate Vicente Gonzalez claims Mayra Flores, supporters 'stole' Texas special election, "Gonzalez made the remarks alongside Democrat Rep. Adam Schiff at a campaign event in Texas." Paul Bedard at WaEx reports the results of an Inquiry: 94% of key 2020 counties wrongly dumped ballot info. Gee, I wonder what they're trying to conceal? Jazz Shaw at Haut Hair has another, Computer experts: Ditch Georgia's voting machines.

An independent panel of experts on computer systems and election security issues has concluded a lengthy investigation into the voting systems currently in place in the state of Georgia and sent recommendations to the State Election Board and Georgia Secretary of State Brad Raffensperger. The current system primarily relies on touchscreen voting machines produced by Dominion Voting Systems. The audit must not have gone very well because they advise that the state discontinue the use of the Dominion machines and move immediately to hand-marked paper ballots. They are also recommending a much broader series of mandatory audits of the results after the initial count is concluded. These changes, they say, will not only afford greater accuracy but increased public confidence in the outcome. But at least initially, it doesn’t sound as if Raffensperger and the rest of the board are warming up to the idea.

At Twitchy, Winning: Gov. Ron DeSantis’ deputy press secretary ‘slightly more embarrassing’ than Christina Pushaw, which means he's off to a good start. Natalia Mittelstadt at JTN, Twitter beefs up tweet policing ahead of midterms amid debunking of secure 2020 election narrative "Despite platform's insistence on irreproachable security, fairness of 2020 election, evidence of irregularities and inequities is abundant — and mounting." Just think of them as an arm of the DNC and you won't be surprised by their choices of what to censor. And speaking of media malpractice, from Fox, Robert Telles arrest: ABC, CBS, NBC, MSNBC avoid mentioning suspect in journalist's murder is a Democrat, "Networks referred to the disgraced Las Vegas Democrat as an 'elected official' who 'lost a primary.'"

Meanwhile the politicization of the DOJ continues apace as Da Caller reports a Lawyer Says Dozens Of Trump Supporters Served With Warrants, Subpoenas Seeking 2020 Election Communications. Nick Arama at Red State, Bombshell Report: Dozens of Trump Allies Raided or Served Subpoenas by FBI and List of Trump Allies Who Had FBI Show up on Their Doorsteps or Got Subpoenas Includes a Big Name, Stephen Miller. At ET, ‘They’re Trying to Take Me out of This Election’: Bannon Responds to New Indictment. You're a nobody if the DOJ isn't demanding to know what you thought about it.

The DOJ-NSD has listed their candidates including:

♦ The Honorable Thomas B. Griffith (ret.) – retired Circuit Judge of the United States Court of Appeals for the District of Columbia Circuit, special counsel in Hunton Andrews Kurth LLP, and Lecturer on Law at Harvard Law School.

President Trump lawyers have listed their candidates including:

Just off the top of my head, I would suggest that Dearie, having been on the FISA court, would solve the problem of needing a security clearance to read the documents in question, but The Dersh disagrees, from News Max, Alan Dershowitz to Newsmax: DOJ Special Master Picks 'Eminently Fair'

"The Department of Justice didn't seem to be appealing everything," Dershowitz told Saturday's "America Right Now." "They were focusing on two things. Number one: The timing — that they didn't want to delay their investigation, and I think they may very well win on that one. And second: They focused more on executive privilege, than they did on lawyer client privilege.

At WaEx, Trump unlikely to be charged before midterm elections as unofficial 60-day deadline passes. Charlie Martin at PJ Media VIP discourses on The First Law of Media Leaks

Jonathon Turley fisks Glenn Kessler's (the WaPoo "fact spinner checker") take on Hillary's claim that she did not possess classified data on her secret, private server, The Post’s Clintonesque “Technical” Truth: The Truth About Hillary’s Email Depends on What the Meaning of “Were” Was "As I have stated previously, I do not believe that the email scandal warranted criminal charges and certainly did not justify the “lock her up” mantra used in the 2016 presidential campaign. However, Clinton is now rewriting history with the help of many in the media who simultaneously pushed this line that the email scandal was a type of conservative hoax. It was not."

To begin our economics coverage, Sundance informs us U.S. Household Net Worth Drops $6.1 Trillion in Second Quarter, Despite Home Values Increasing $1.5 Trillion. Meanwhile, from Da Wire Janet Yellen brags ‘We Have Experienced One Of The Quickest Economic Recoveries In Our Modern History’. Sundance again, Secretary Yellen Celebrates Treasury Policy Making “Future U.S. Economy Dependent on the Wind and the Sun”. At Oil Price, though, The Energy Transition Could Be Derailed By A Looming Copper Shortage. Not enough copper mining to support the green dream. From ET Biden Administration Settles With Eco Groups, Blocks Oil Drilling Leases on Almost 60,000 Acres. The old sue and settle scam. At I&I, With Biden Loan Bailout, Federal College Aid Could Top $270 Billion A Year. A few hundred billion here, a few hundred billion there, and pretty soon you're talking about real money. AIER reports U.S. Economic Freedom Index Collapses to Carter Administration Levels. Yes, Carter always was a best case scenario for the Biden administration.

Media outlets and leftwing activists jumped to blame “racism” to be the root of the Jackson water “crisis.” NBC News’ Kat Tenbarge, citing the 80% black population of Jackson, said the system failed due to “environmental racism.”

“More people need to be talking about Jackson, Mississippi. The city ran out of bottled water to give residents yesterday. It’s the largest city in Mississippi. It’s 80% Black. Their water system is failing because of years of neglect. This is environmental racism,” Tenbarge tweeted.

Although one is tempted to blame either incompetence or corruption on the failure of the Jackson water system, the likely answer is both.
At Da Wire, Boise Pride Backs Down, Cancels Controversial ‘Drag Kids’ Performance As More Sponsors Pull Out, "At least six sponsors have dropped out of Boise Pride Festival due to concerns over performance involving minors." WaT, cited at Haut Hair, features two mothers who tell how to Cutting off gender indoctrination at its source.

The social pressures these girls face are nothing new. Back when I was in middle and high school, they most commonly displayed themselves through eating disorders, like anorexia or bulimia. Now, they’re appearing in the form of transgenderism. Indeed, a friend of mine who works as a social worker in Washington state told me recently that more than half of the children she works with identify as a gender different than their sex or as no gender at all. This is a social epidemic, and it is devastating the very children who need our help the most.

At Summit News, Rand Paul says “America Should Be Appalled” At Fauci Covering His Tracks. You don't become one the US's oldest and highest paid bureaucrat by not being sneaky. 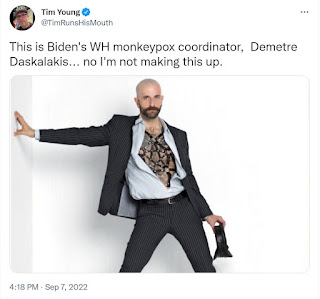 Ace, Biden's New Deputy Coordinator on Monkeypox... Literally Wrote the Article Instructing Health Professionals To Lie About How Monkeypox Is Really Spread, and By Whom, In Order to Spare Gays "Stigma"


And he got the health professionals across the country to lie about monkeypox, too.

He was appointed, without media fanfare, Biden's National Deputy Coordinator on Monkeypox on August 2nd. No rainbow confetti parades for this guy. No media Victory Tours.

Want to know why? 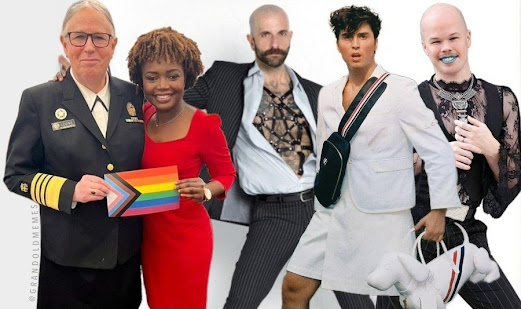