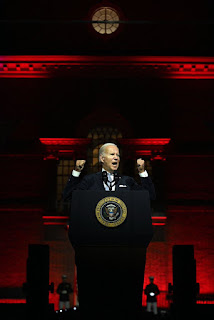 I hear Preznit Biden gave a speech last night. In keeping with my bi-partisan habit on not watching political speeches, we chose reruns last night instead. Sundance at CTH predicted Biden Speech Will Call for Nation to Drop Demands for Freedom, Stop Resisting Collectivism and Unite as One Nation Conforming to the Dictates of His Administration  I hear it was a real stemwinder though. Stacy McCain noted Joe Biden’s Blood-Red War Speech


"Everybody noticed the optics of the speech Thursday night in Philadelphia: The “blood red” lighting, the Marines standing at attention. . . As many observers remarked, Biden essentially declared war on the 74 million Americans who voted for Donald Trump in 2020, declaring them a “clear and present danger” and a “threat to the country.” Thirteen times he used “MAGA” to define these enemies. . . . We are now less than 10 weeks away from Election Day, and what Biden wants is for some fringe kook to go off on a rampage that will serve to dramatize the “clear and present danger” theme he rolled out.

Spencer Brown at Town Hall finds that even CNN Blasts Biden for Using Military As Backdrop for 'Battle' Speech: 'It's Wrong'. Nick Arama at Red State, CNN Calls out Biden's Use of Marines in Speech, Left Goes Wild in Response. Sundance at CTH calls The Optics Created by Joe Biden Communication Team for a National Address Off the Charts Creepy. Paula Bolyard at PJ Media, Two Minutes Hate: Biden Rails Against His Fellow Americans in Dark, Threatening Prime-Time Speech. 'Bonchie' at Red State thinks Joe Biden Crosses Lines in Grotesque National Address, Heckler Spoils His Party. At PM, Hecklers chant 'F*ck Joe Biden' as President attacks MAGA Americans in dark Philadelphia speech. At Althouse, Why did Biden use "Hail to the Chief" as a prelude to what was a hardcore political speech? "I'll post separately about the speech. I mean, I can sum it up in 7 words: We the People, but not you people."

I've been thinking about the principle expounded in these 2 cases — "the people should choose whom they please to govern them" — in the context of the present-day effort to exercise governmental power to disqualify Donald Trump as a candidate for President.

Please consider this post a continuation of yesterday's post — "The spectacle of a former president facing criminal investigation raises profound questions about American democracy" — where I said: "The urgency to stop Trump feels like a mistrust of the people. The deplorable subsection of America shouldn't have elected him the first time — so goes the elite opinion — and we can't let those people have another chance to give this man power. That's anti-democratic, and yet isn't it why the oligarchy presents itself as serving democracy?"

Breitbart has Reuters Poll: Joe Biden’s Net Approval Drops 7 Points in One Week. Plus minus three or four. At Town Hall, Matt Vespa claims The Latest Hispanic Trend Is Not Good for Democrats. Shifting Protestant? Jazz Shaw at Haut Hair says People are begin to notice that Biden spent 40% of his first term on vacation. I say the less time he spend "presidenting" the better. AllahPundit at Haut Hair is giddy with Bad vibes: Abortion fight spurs Dems to three-point lead on generic ballot, says WSJ poll.

Ace, Ouch: Democrat Mary Peltola Beats Sarah Palin to Serve the Remainder of Don Young's Term as Alaska's Lone Statewide Congressman, "So... the polls predicted that if Sarah Palin, rather than the other Republican Mark Begich, were put up against Mary Peltola as one of the top two finishers, Mary Peltola would win. . . . This is due to the ranked-voting system. Lisa Murkowski supported this system so that she could at least make it to the general election." AllahPundit considers Would Palin have won if Alaska had held a traditional election? "There’s every reason to believe that if Alaska had followed a traditional system this year — party primaries, then a general election between the nominees — Palin might have lost that too." Althouse wonders Is ranked-choice voting more of a scam than other kinds of voting? Yes. Even if Sarah would have lost regardless.

At the Wombat's In The Mailbox: 09.01.22  At Da Fed Chris Bedford thinks McConnell Sounds Like He Wants To Abandon A Ship Rick Scott Wants To Captain, AllahPundit is peeved at Rick Scott: Certain people who shall remain nameless should stop trash-talking our Senate candidates. the Murder Turtle. Sundance calls Scott Subtle, But Valuable – Senator Rick Scott Pushes Back Against Arrogance of Senate DeceptiCons.  Nick Arama notes how Liz Cheney Throws a Tantrum at Ted Cruz, but He Decimates Her With the Perfect Response. Jordan Boyd at Da Fed thinks Ron Johnson Is The Left’s No. 1 Midterm Target Because He Hits Swamp Elites Where It Hurts. 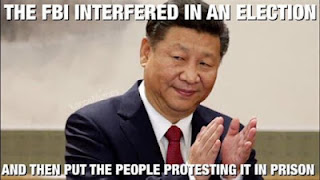 Natalia Mittelstadt at JTN reports Wisconsin legislators sue election regulators to block clerks from ‘curing’ errant ballots, "The rules for how elections should be carried out should not be changing weeks before the election." And clerks shouldn't be changing ballots. AllahPundit pleased as punch, Did the Senate just lock down the votes to "Trump-proof" the next election? I'm OK with eliminating ambiguity, as long as we eliminate it for Democrats too. At Twitchy, David Axelrod has a very simple explanation as to why it’s bad for GOPers to question election results but it’s OK when Dems do it "When we (D)o it, it's (D)ifferent"

At JTN, Judge does not issue ruling on Trump's 'special master' request. WaPoo whines Cannon to issue written ruling on Trump special-master request, "Federal judge indicates she may believe the former president retained some executive privileges when leaving the White House." AP, Trump documents probe: Judge appears open to special master. "“Ultimately, what is the harm” in such an appointment, U.S. District Judge Aileen Cannon asked department lawyers. But she did not rule on the request, saying she would do so later." The NYT (cited at Haut Hair) thinks Trump's legal jab left him open to DOJ strike. AllahPundit sneers, Trump now basically admitting that he had classified material when the FBI showed up at Mar-a-Lago. No, he says formerly classified material. NR never-Trump Andy McCarthy (cited at Haut Hair), thinks he knows How the DOJ has built a case against Trump for obstruction. At Mediaite, John Bolton: ‘I Wouldn’t Be Surprised’ if Trump Kept More Classified Documents at His Other Properties. WSJ (from Haut Hair) reports a Poll: Majority view Mar-a-Lago search as justified. Yes, and nominally, a majority voted for Biden, so what? Justification is a legal matter, not a consensus of the partisan. Never-Trumper Charles Cooke at NR, cited at Haut Hair, Donald Trump is still a lunatic. But it just may be a lunatic you're looking for.

Matt Margolis at PJ Media hears Former DNI: DOJ Didn't Find What It Was Looking for in Mar-a-Lago Raid (Ratcliffe). Insty quips THE ONLY THING THEY WERE LOOKING FOR WAS THE OPPORTUNITY TO CREATE BAD OPTICS FOR TRUMP. At Breitbart, FBI Blasted for ‘Staged’ Photo of Documents Seized in Mar-a-Lago Raid. Herr Professor Jacobsen at LI, Apparently Staged Mar-a-Lago Photo Doesn’t Help FBI/DOJ Credibility And Doesn’t Reveal Anything We Didn’t Already Know. "If this is a staged photo it may have given the feds a minor news cycle win, but it didn’t help FBI/DOJ credibility. It makes them seem like they are playing to the media, but in fact they played into Trump’s argument that the FBI/DOJ can’t be trusted.”" At Da Caller, Top FBI Official Who Quit Agency Had Long History Of Misconduct Allegations.

At the Wombat's In The Mailbox: 09.01.22 Da Tech Guy says the Democrats used the FBI as an attack dog to censor Americans on social media during the 2020 election, Mary Chastain at LI thinks Biden Admin Colluded With Social Media Platforms to Censor and Suppress Content and  Shawn Fleetwood at Da Fed reports Bombshell Emails Show The Biden Administration Colluded With Big Tech To Censor Covid ‘Misinformation’ At Am Great, Eric Lendrum FBI Agents have Allegedly Lost Confidence in Director Christopher Wray. At PJ Media, Stephen Kruiser worries about How Long Can America Survive a Rogue Department of Justice?. Miranda Devine at NYPo calls them Tyrannical old Joe’s secret police state. Libby Emmons at HE,  maintains Joe Biden Is the Fascist in the White House. Kylie Shideler at Am Great decries Joe Biden’s Antifa Politics "Targeting tens of millions of Americans who support mainstream policies while mainstreaming the views of dangerous street revolutionaries is only going to dangerously fragment our politics."

Prosecutors have accused Rhodes and his militia group of plotting for weeks to stop the transfer of power and keep former President Donald Trump in office, purchasing weapons, organizing military-style trainings and setting up battle plans.

SoRelle told The Associated Press last year — when FBI agents seized her phone as part of the Jan 6. investigation — that she had no knowledge of or involvement in the Capitol breach. She called the seizure of her phone "unethical" and the investigation "a witch hunt."

More judicial harassment reported from atop Da Hill Jan. 6 panel alleges Gingrich involvement with Trump efforts, seeks interview. WaPoo whines Trump vows pardons, government apology to Capitol rioters if elected, "The comments came on the same day President Biden was delivering a prime-time address warning of the threat to democracy from “MAGA Republicans” and election deniers." Insty, MANNING REMEMBERS: "Rick Manning, head honcho of Americans for Limited Government (ALG), that is. Remember when the Left rioted in D.C. the night Trump was nominated by the GOP convention? Manning was there and he, along with many others who were trying to walk a few blocks to their cars, were blocked by the rioters and rescued by the D.C. police. Can you guess who didn’t say a word about it?"