At NotTheBee, the Babylon Bee's site for real news strange enough to be satire, This leftist didn't understand why he was just arrested for running over, killing an 18-year-old "Republican extremist." Huh. "Video interviews show Brandt visibly confused over why he was the one being arrested. The guy really did think he was doing a good thing killing a conservative kid." At Twitchy, MSM don’t think man confessing to ‘politically motivated’ vehicular homicide of Republican teen is worth covering for some reason. Mia Cathell@MiaCathell, "Jail confirmed to me that Shannon Brandt, who reportedly confessed to killing a North Dakota teen because the 18yo victim was "part of a Republican extremist group," posted bond and is back on the streets. Since his release, it appears Brandt started scrubbing his social media." At Town Hall, Alleged Killer FREED After Confessing to Mowing Down Teen Over 'Political Argument'

The political violence in the Upper Midwest region of America comes weeks after President Joe Biden's divisive, anti-MAGA speech in the City of Brotherly Love declared war on Republican voters nationwide. With an authoritarian-esque backdrop of blood-red lighting and flanking Marines, the Democratic U.S. president's rhetoric accused Trump supporters of harboring "anger," spreading "chaos," and living in the "shadow of lies."

Capt. Ed At Haut Hair, Unbelievable: Suspect in politically motivated homicide out on $50K bail At Da Caller, North Dakota Man Who Committed ‘Politically Motivated’ Murder Of ‘Republican’ Teen Released On Bail. Ace, The Domestic Violent Extremist Who Ran Down and Murdered an 18-Year-Old Teen For Being a Republican Is Already Out on Bail. Meanwhile, Non-Violent January 6th Protesters Were Held Without Bail For Months For Non-Violent Offenses Like "Parading." Deb Heine, Dissident
@NiceDeb "Can you please focus on what's important? 3 weeks after Joe Biden gave a speech demonizing "extremist" "MAGA Republicans," a Democrat in SD mowed down a Republican "extremist" teen with his SUV, killing him. The assailant is already out on bond." Insty, MAN ADMITS TO KILLING TEEN HE CLAIMED WAS ‘REPUBLICAN EXTREMIST:’ . . . More: MSM don’t think man confessing to ‘politically motivated’ vehicular homicide of Republican teen is worth covering for some reason. Breitbart, Media Will Never Hold Biden Accountable for Death of Cayler Ellingson. And speaking of political murders, Fox reports Las Vegas Dem accused of murdering journalist faces removal from job. "Robert Telles, 45, is accused of viciously stabbing journalist Jeff German, 69, on Sept. 2 in Las Vegas." 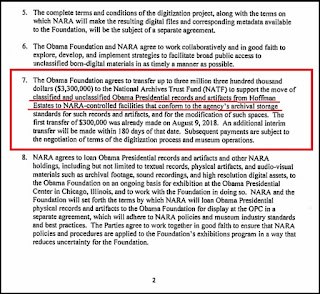 Sundance at CTH has the receipts, Letter Surfaces of Obama Foundation Admitting in 2018 They Keep Classified Documents in Unsecured Storage at Furniture Warehouse


“Hoffman Estates” is a Chicago area location containing an abandoned furniture store and warehouse. The Obama Foundation leased, then re-upped the lease, to use the facility to store all the paper documents from the Obama administration {Location Link}.

The Obama administration told the National Archives and Records Administration (NARA) they were going to upload the documents into a digital form for use in the Obama library. The paper documents were, still are, held at the Hoffman Estate warehouse while this digitization process took place. It should be noted, the Obama Foundation has never digitized the records, hence they renewed the warehouse lease.
. . .
The intent of sharing this information is just to highlight the political dynamic within the NARA, DOJ and FBI as it pertains to selective enforcement of presidential records.

Meanwhile, Sundance also reports Citing the Need to Defer to National Security Claims of DOJ, 11th Circuit Court Grants Motion for Stay Over Florida Judge Ruling in Mar-a-Lago Document Case, Special Master Blocked from Reviewing Classified Documents. "The court (judicial branch) openly states they defer to the DOJ (executive branch) as to any/all claims of harm to national security that may be caused by a review of documents the DOJ-NSD determine, on their own authority, to be identified as classified (sensitive, secret or top-secret).  Therefore, if the DOJ states sharing the “classified documents” with a special master may harm national security, they court must accept that position without challenge." At JTN, Appeals court panel allows DOJ to continue reviewing documents from Trump raid. Politico crows Trump suffers setback as appeals panel rejects Cannon ruling

At Da Wire, FBI Suspends Whistleblower Who Criticized Bureau’s Handling Of January 6 Investigations: Report. Stifling dissent in the ranks. Dan Bongino@dbongino "NEWS: I have been contacted by an FBI whistleblower. He is a patriot. And he's ready to talk. Rumble is the only place where this interview is safe from censorship. Do not miss this. Subscribe to my channel and be ready when part 1 drops tomorrow: http://Rumble.com/Bongino"
Capt. Ed, BREAKING: NY AG files civil suit against Trump, Trump org, family.

As I’ve written before, much of this still seems curious, especially in the form of a civil lawsuit by James. If the Trumps committed fraud in their lending, insurance, or real estate transactions, who did they defraud? None of the lenders are apparently on board with this action, as Trump has continued to pay off his loans, making them whole regardless of the estimates he would have provided. Neither does there appear to be any significant conversion of funds on insurance claims. And even if those did prove fraudulent, lenders and insurers would have standing to sue Trump on their own to recover losses. If they’re not suing, why is James?

Ed Driscoll at Insty,  TOWNHALL’S KURT SCHLICHTER LAYS OUT HOW NEW YORK’S LAWSUIT AGAINST DONALD TRUMP WILL GO. “I expect the case will be dropped or tossed after a couple motion to dismiss rounds. Maybe there will be a small, piddling settlement the AG will claim is a victory. It’s not a real lawsuit. It’s lawfare. And I hope red AGs are taking note of the new rules.” Breitbart, Bill Barr: NY State AG Trump Lawsuit ‘Political Hit Job’ — Dragging Children in ‘Gross Overreach’. Ben Whedon at JTN, Bill Barr blasts NY AG for 'overreach' in Trump family prosecutions. At Town Hall, Cutie Pavlich reports Trump Family Fights Back After Letitia James' Latest Attack

The Peacock crows Ginni Thomas to meet with House committee investigating Jan. 6 riot. She should give them the finger. But she won't.

Haut Hair reports an Interactive Poll, Biden approval still sinking among independents. From the AP, Ad spending shows Dems hinging midterm hopes on abortion. John Sexton at Haut Hair hears Bill Maher: Democrats could win every election if they'd 'stop talking about pregnant men'. He's got a point; it's an exaggeration, but that's what comics do. Capt. Ed, Hmmm: DeSantis leads Trump by seven in 2024 matchup -- in Florida. I'm OK with that.

Oregon, My Oregon! From LI, Panicked Democrats Throwing Big Money at Oregon Governor Race, “The Democratic Governors Association poured over a million dollars into the Oregon governor’s race last week, its largest contribution yet in the state.” ADN America, New Georgia poll shows GOP ahead on almost all fronts, "Outside the Senate race, every Democratic candidate statewide was facing a "sizeable deficit" against their Republican counterparts." Even Walker has a 2 pt lead. At Fox, John Fetterman defended Obama’s comments calling small-town Pennsylvanians ‘bitter.’ "Fetterman's campaign did not respond to Fox News Digital's questions." Insty NYT: A Shrinking Margin.

Whatever the full explanation, Hispanic voters have moved to the right over the past several years. As a group, they still prefer Democrats, but the margin has narrowed significantly. In 2020, Joe Biden won the group by only 26 percentage points. And in this year’s midterms, the Democratic lead is nearly identical to Biden’s 2020 margin, according to the latest New York Times/Siena College poll — a sign that the shift was not just a one-election blip.

The problem for Democrats is that winning the Hispanic vote by only 26 points may not be enough for the party to accomplish its main goals.