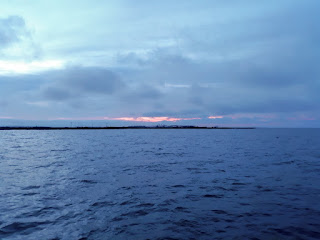 Another o'dark 30 start to get to the eastern side of the world before sunrise. We started at a familiar site on Hoopers Island, using poppers and other top water plug. Stripers were stingy, and we only managed a few. 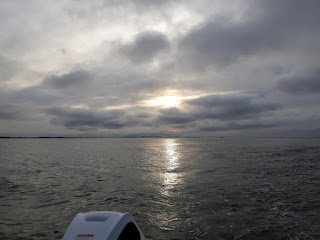 The sun rising over Hoopers Island 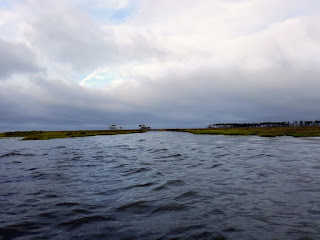 The shore of Bloodsworth Island. 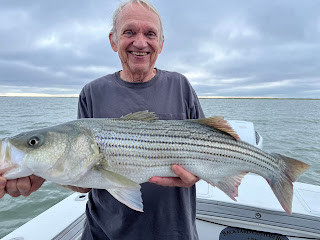 We did get one very nice striper on a wreck just off the shore. This is Brooks Jackson, a former AP, WSJ and CNN reporter, and founder of Factcheck.org, with his 30 inch summer beauty. 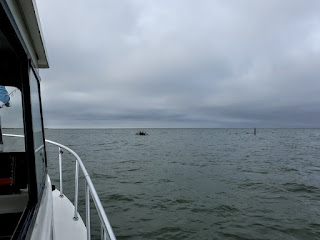 Another familiar site, the old front end loader at the former site of the last house on Holland Island. No fish here today either.
We stumbled upon a bunch of Bluefish out in shallow water between islands, marked by a few circling terns, and managed to get a limit in the box. 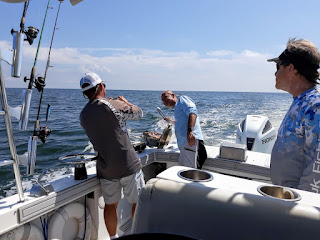 We went as far south as Smith Island, where we found a few more stripers (we ended two short of our boat limit) another huge slug of Bluefish. One the way back, we zig zagged up the channel looking for Redfish and Cobia (unsuccessfully), and in the meantime, broke out the propane grill. 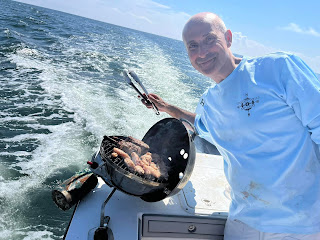 One of the other fisherman was Carlo Vignotto, owner and chef of La Tavola, a restaurant in Little Italy, Baltimore. He brought marinated calamari, steak and cinghiale (wild boar), and grilled it up as we idled up the bay. Excellent! 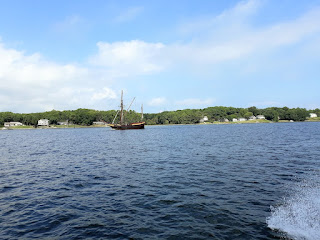 One interesting sighting on the way home, a sighting of the Maryland Dove, a tall ship normally docked at Historic St. Mary's City, on the way back to Solomons Island.